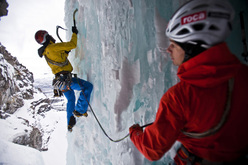 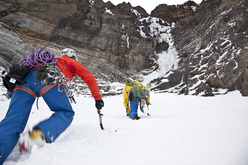 The approach at Sordalen
Photo by Hannes Mair

Details of the latest ice climbing trip to Norway by Albert Leichtfried and Benedikt Purner who in mid February established a series of new routes together with Gerry Fiegl e Paul Mair.

With the final stage set for the remote Lofoten islands, the quartet decided to explore the ice climbing potential close to Narvik. Like last year they homed in on the valleys using Google Earth, and after having warmed up on "Flågbekken" WI5/6 at Salangen, the next day they travelled to Bønes were they established"Frozen Bønes" (WI6 X/R, 250m).

The four then paid a visit to Sordalen where Leichtfried and Purner established what they define as being "the absolute highlight of our climbing career","Stalker" (WI6/M7 700m) and "Remember Mi" WI7-/M8, a three pitch route dedicated to Michl Uhrmann. Fiegl and Mair left their mark with the first ascents of "Reinkarnation" WI5R and "Golden reward" WI6/M7.

The final act on the Lofoten Islands should have been the super meeting organised by the Norwegian Alpine Club to which other calibre alpinists were invited such as Marko Prezelj, Colin Haley, Aljaz Andere, Andy Turner and Nick Bullock to name but a few. The meeting itself was superb, but the weather terrible - with gusts of wind up to 2200 km/h and constant rain - forcing the group of some of the best alpinists in the world - to stay pretty much grounded. Some times (thankfully) it happens to them, too...