Mt Dickey, Alaska: Jason Stuckey leading the first belayed pitch off the glacier early on March 20th (first day). The ice was more neve than ice so though protection was limited the sticks were solid. From here the route continues up and right.
Photo by John Frieh 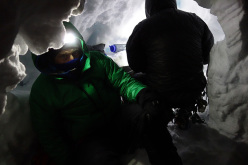 Mt Dickey, Alaska: Chad Diesinger (green jacket) and Jason Stuckey (back to camera) settling in for a "sit and shiver" session.
Photo by John Frieh 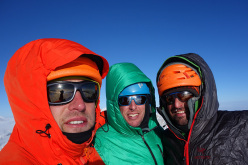 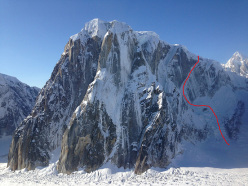 On 20 and 21 March 2015 the NE Face of Alaska’s Mount Dickey was breached during a grueling 48-hour push by John Frieh, Chad Diesinger, Jason Stuckey via a new route called Blue Collar Beatdown. The new line tackles difficulties up to V WI4 M4 65° and is Frieh’s second route on this peak, after No Such Things As A Bargain Promise (VI A0 WI5R M6) climbed in 2012 together with Doug Shepherd.

As the winter of 2014/2015 unfolded it seemed to me climbing conditions during the following traditional spring climbing season in Alaska would be lean at best. It was the warmest winter ever on record for the state of Alaska; add to that one of the lower snowfall accumulation totals the state has seen in recent years. For these reasons I started looking for weather windows as soon as March rolled around. Having successfully climbing Mt Huntington twice in the month of March (2011 and 2014) I knew if I could identify a viable weather window I could likely find something to climb.

After much deliberation over where a dominant low pressure system would settle in the gulf and what that would mean for weather in the Central range I finally committed and grabbed a last minute ticket to Fairbanks. I landed early in the morning of the 19th and Jason Stuckey, Chad Diesinger and I immediately departed for Talkeetna. We rolled into town just as the Roadhouse opened where we each pounded the traditional half standard, a Rudy and a Razzy before heading to Talkeetna Air Taxi. After some bag shuffling we departed for the Ruth.

As always Paul Roderick of Talkeetna Air Taxi was gracious enough to “fly slow” on our way in and, after some observations from the air, ruled out a few possibles and made a decision to look at the NE face of Mount Dickey. After establishing camp we skied over and glassed the NE face. Though what we found wasn’t exactly confidence inspiring it was enough to merit a “let’s go see tomorrow” plan for the next day.

The following morning we departed camp at approximately 4:45 am and made the short ski over to Dickey. We cached the skis near the face and started hiking. To be honest I can’t recall when we reached the face but I want to say around 7 am or so. We climbed two full pitches of snice (snow ice) that took sticks great but was a little limited on protection options. Given how thin these pitches were in places I reckon possible repeaters of this route should plan on an early spring ascent.

These two pitches put us on the snow ramp that slashed the face. We immediately started blocking it out, simulclimbing when the terrain allowed for it. We encountered bottomless sugar to mixed climbing and everything in between. I had the final block of the day that started at dusk and ended well past dark.

Our original plan/hope was to be off the face before sunset and then rely on my 2012 ascent knowledge to descend in the darkness or, worst case, enjoy a sit, brew and exercise session on the summit plateau. Unfortunately things didn’t go according to plan and after getting shut down by complex route finding in the dark we resigned to digging a pseudo snowcave into the side of a snow fin and sitting down to wait for dawn. When we finally settled in it was around midnight so we "enjoyed" four long hours of the Alaska night. Ironically (at least to me, I suppose) that night was the last night of winter and the following morning was the first day of spring. In my opinion, as we were not on the summit by this point ours does not count as a winter ascent. Since none of us had brought any bivy gear the Reactor saw plenty of use that night. No one slept out of fear for their fingers and toes.

As soon as it was light we blasted out of the cave and promptly restarted our efforts to get off the face. After two failed attempts we finally found a way off. It was much later in the day than any of us had hoped and we slogged over and tagged the summit at around 5 pm.

We reached 747 pass around 8 pm and sat down for a final brew session as the last daylight faded away. Coffee, Perpetuem and what little we had left to eat was consumed before we began what would end up taking another 8 hours to finally reach our tent on March 20th at 4 am. All told we were awake for 48 hours and more or less on the move for all of it minus the 4 hour "sit and suffer" session.

"Blue Collar Beatdown" is my second first ascent on Mount Dickey and my 9th “first” in Alaska since my first trip in 2009. Many thanks to all the great partners that have climbed with me on these over the years.

MOUNT DICKEY INFO
Mount Dickey was first climbed on April 19, 1955 by David Fischer and the famous explorer, climber and cartographer Bradford Washburn, via the West Face, which is still the most popular route today. Brian Okonek and Roger Cowles completed the first winter ascent of Mt. Dickey in February 1979, via the West Face route.