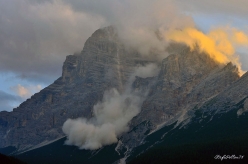 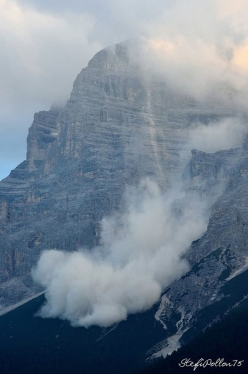 On 29 July 2016 rockfall occurred on the South Face of Mt Pelmo, towards San Vito di Cadore in the Italian Dolomites. The video by Giordano Fregonese.

At 20:00 on Friday, 29 July 2016, a massive rockfall shattered onto the southern aspect of Mt. Pelmo, towards San Vito di Cadore in the Dolomites. The rock fall, as reported in all the news, did not involve people. The sharp boom could be heard distinctly at Rifugio Venezia while at San Vito and further down in the valley many saw the huge cloud of dust caused by the debris (see the video below by Giordano Fregonese.).

According to initial reports, it seems as if the rockfall affected the East shoulder of Mt. Pelmo. As many know, this is not an isolated incident and the Dolomites (and the mountains in general) are subject to these phenomena. Many believe global warming is increasing the frequency of rockfall.

Pelmo was covered in clouds yesterday morning. From what one could make out, there was nothing more than a clear streak that indicated the path of the debris. Surveys will be needed to get a clearer picture of how much rock collapsed.