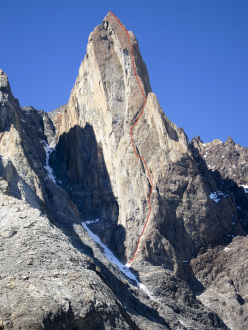 According to Haley this steep face had remained unclimbed probably because climbers feared "dangerously loose rock" and consequently the two prepared themselves, after a night at the Niponino bivouac, for "intense, potentially scary pitches". Much to their surprise though they encountered quite the opposite: "From the very beginning, we were delighted with what we found - the rock, while not perfect, was far from loose or poorly-protected."

The two climbed featured red rock, up the path of least resistance and via the best-looking climbing, past difficulties up to 5.10, A1 to reach the knife-edge crest which led to the summit proper circa half an hour before nightfall. They descended to the east to Laguna Sucia, and after a cold night at the Rio Blanco campground returned backl to El Chalten.

After the ascent Haley exclaimed "This ascent felt like a real coup, because the quality of the climb far, far exceeded our expectations" and concluded "It is a route I highly recommend."

Full report and photos on www.colinhaley.blogspot.com