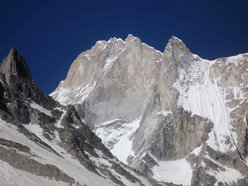 Meru. The Shark's Fin is the immense pillar on the right.
Photo by Meru Eleven

Third time lucky they say. This certainly holds true for American alpinist Conrad Anker who on October 2 successfully breached the hitherto unclimbed 1300m high central pillar called Shark's Fin on the NW Face of Meru along with two other ace American alpinists, Renan Ozturk and Jimmy Chin. To give an indication as to the importance of their achievement, this beautiful rock "missile" had been attempted by at least 10 expeditions in the past.

After arriving at Basecamp on 15 September the trio lost little time and set off on the 21st to reach ABC 6 hours later. The started up the wall the following day via the line they had attempted previously and climbed past snow and technical ice pitches to establish Camp 1 on 'The Balcony' two days into the climb. This led them to steep overhanging rock and after their Camp 2 hanging bivvy at circa 5800m they made their way past the steepest and most dangerous sections, through "an overhanging prow of aid climbing in outer space" which they dubbed the 'Crystal Pitch' and graded A4. The bottom half of the route had therefore been breached in a 6 day push and with the main difficulties now behind them, Anker, Chin and Ozturk continued via a combination of aid and mixed climbing and reached the summit 5 days later, on 2 October, and safely returned to base camp 2 days later. In total therefore 11 days non-stop on the face, plus two for the descent, in perfect alpine style to succeed on what is certainly an extremely noteworthy ascent!

Success comes in the wake of the trio's 2008 attempt, when they battled hard against a 5 day storm and were forced to turn back 100m short of the summit, and also Anker's first attempt in 2003 along with Bruce Miller and Doug Chabot when the team retreated at circa 6000m due to deep unconsolidated snow and no big wall gear for the upper wall.

The North Face of Meru Central Peak had been first ascended in 2001 by Russian alpinist Valeri Babanov, on his second attempt, in a truly impressive 5-day solo climb which, unsurprisingly, netted him the prestigious Piolet d'Or in 2002. In October 2006 a Czech expedition comprised of Marek Holecek and Jan Kreisinger established "Filkuv nebesky smich" (2000m, 7a, M5) to the left and this avoided the upper rock headwall by traversing right to join Babanov's line.