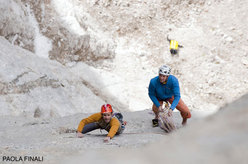 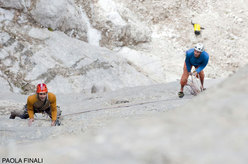 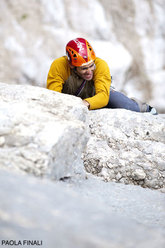 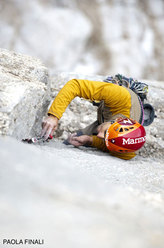 After his first ascent of Perla preziosa, Nicola Tondini returned in July to the beautiful Sass dla Crusc with Ingo Irsara to establish and subsequently free - in September- his route Menhir, a difficult new outing up the famous Pilastro di Mezzo on the imposing and beautiful West Face. The 200m line is split into 5 pitches and starts just to the left of the Via Gabloner gully, ascending 3 pitches up the black slabs to the right of Via dei Fratelli Messner. This is followed by a 2-pitch slalom between the yellow roofs to reach the large grey mirror on the upper section of the face, with difficulties up to XI- (7b+) and a crux located on the second pitch.

It is worth noting that Menhir takes a completely autonomous line from the famous route first ascended in 1968 by Reinhold & Günther Messner. The two are separated by a minimum of circa 10-12 meters at the end of the lower traverse on the Mariacher variation which, as many know, lies circa 15m from the Messner route. It is also worth underlining that Menhir was first ascended using trad gear only (trad and pegs) on the pitches, cliff hangers were weighted to place the pegs and three bolts were placed on the belays.

This, according to Tondini, needs underlining "not to be precise, but because we're aware of the fact that there is a big difference between climbing an unknown line with bolts in your rucksack (as we did) and climbing a route in the style that the Messner brothers did during their first ascent, and as Heinz Mariacher did during the first repeat and first free ascent." Unsurprisingly we'll analyse the historic Messner route and the famous crux with Tondini in the near future. In the meantime though, enjoy the report of the free ascent of Menhir... and enjoy the video filmed by Andrea Tosi which (to whet your appetite) starts with a "warm-up" on the famous Messner sequence...

We reached the summit of Pilastro di Mezzo at 13:00 via the Messner route. Massimo is a great friend and extremely strong client and he was really happy, his dream had come true! We stopped to eat and drink something, then I abseiled off to reach Ingo who was waiting for me at the start of Menhir, it was 14:00. Some drops of rain seemed to dampen our spirits, but luckily this turned out to be a false alarm. We needed 5 hours to free the five pitches of our new route. The rock, bar a couple of meters on pitch 4, is always exceptional.

The second pitch is the hardest and I only just didn't blow it: my foot slipped on the crux and suddenly I was suspended on two micro-crimps. Ingo encouraged me from below, but I couldn't see and think clearly... I heard him shout up "come on, just above you there's a good hold" and, making use of the final moment of lucidity, I dynoed to the good hold... and stuck it! The 3rd and 4th pitch flowed smoothly beneath our fingers, so much so that I finally began to relax. Before starting up the last pitch I even had the nerve to say to Ingo "It's as if can't get pumped any more..."

Famous last words! After the first 10 meters my forearms turned to stone. I couldn't remember the moves on this slightly overhanging final section, up the rounded holds. But I was in the midst of it all, had to grit my teeth to not ruin this perfect day. The sun began to set, kissing the West Face of the Pilastro di Messo of the Sass dla Crusc, providing us with the final emotions of the day. I'd really like to thank everyone: Massimo, Andrea, Paola and Mario and above all Ingo with whom I established this new route.

Menhir is a route which we attempted to first ascend using trad gear. Cliff hangers were used only to place the pegs. No aid was used and we didn't rest on the clff hangers between one piece of pro and the next. We reckon this style is honest towards those who wish to repeat the route: all the moves have already been done during the first ascent and there are no nasty surprises between the pro, we never cheated on the cliff hangers. Two belays were backed up with bolts, two other belays have pegs while one needs camming devices.

One final and important thanks to: Marmot, Wild Climb, Ferrino and the shop TurnoverSport for the excellent gear.

The photos and film made during the ascent are part of a evening show elaborated by Andrea Tosi and Paola Finali during which Nicola Tondini gives a sweeping view of his vertical activity. In particular, this concentrates on Tondini's "trad" first ascents in the Dolomites, his hard ground-up sport route first ascents and important repeats (such as the Messner route on Pilastro di Mezzo del Sass dla Crusc and the famous section on the "Messner slab") as well as his winter climbing.