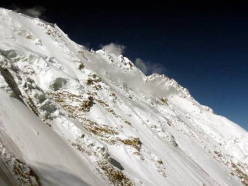 The final (east) section of the Mazeno ridge and the summit of Nanga Parbat in the furthest distance.
Photo by archivio www.mazeonridge.com

Mazeno Ridge: ascent completed to the summit of Nanga Parbat!

The expedition comprised of Cathy O’Dowd, Sandy Allan and Rick Allen has just reached the summit of Nanga Parbat after having climbed the entire Mazeno Ridge.

12/07/2012 UPDATE AT 14.00
Contrary to Cathy O'Dowd's Twitter message last night, the South African alpinist has now published new messaged in which she makes clear that the summit has not yet been reached. Her climbing partners Sandy Allan, Rick Allen and the Sherpa Rangduk and Zarok are currently on a summit push. Read the news report.


PUBLISHED ON 11/07/2012
This is a big one and still need confirming in all its details, but a few minutes ago South African alpinist Cathy O’Dowd published via twitter the excellent news: the expedition has successfully summited Nanga Parbat after having become the first ever to traverse across the immense Mazeno Ridge.

As we mentioned a few days ago, the expedition was - and still is - engaged in one of the biggest challenges in the Himalaya, namely to reach the summit of the ninth highest mountain in the world via the infinite Mazeno Ridge. A formidable ascent past eight 7000m peaks and, above all, along that incredible 10km knife-edge ridge which separates two of the most famous and most dangerous faces in the world, the Rupal Face and the Diamir Face...

Another interesting detail about this adventure, apart from the ascent in itself which began on 2 July, is also the fact that O’Dowd has been communicating almost live via twitter. 150 (or less) characters to inform the entire world about what is happening up there, at 8000m. It's superfluous to say that these messages and O’Dowd's extraordinary tweet does little to satiate our curiosity... but they'll be plenty of time for this. Also because reaching the top is only half the climb and all our thoughts therefore go to the team's safe return to Base Camp. We hope to hear more good news soon, posted directly @ twitter from the Mazeno Ridge...