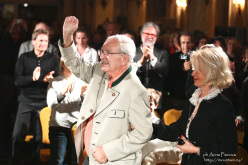 Maurice Herzog on Annapurna in 1950
Photo by 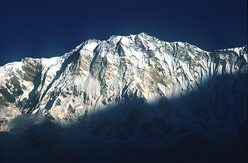 The immense south face of Annapurna, at 8091m, the 10th highest mountain in the world.
Photo by Loris Marin

It was 14:00 on June 3, 1950 when Maurice Herzog and Louis Lachenal set foot on the summit of Annapurna: for the first time ever, an 8000m peak had been climbed. This historic date marked an immense achievement which made headline news across the world and rendered Herzog a true hero at home. A member of the French resistance during the Second World War, subsequently Minister for Sport under De Gaulle and mayor of Chamonix from 1968 to 1977, Herzog represented that race to be the first to climb the eightthousanders in an era dominated by so-called national expeditions, often sponsored by the individual countries. But Herzog was also a symbol for alpinists who fight to the bitter end, beyond their energy reserves, in order to reach the summit. An alpinism which many have defined as "heroic."

Maurice Herzog recounted this great Annapurna adventure, his biggest of all, in a book that is still a mountain literature best-seller: "Annapurna Premier 8000" (Annapurna: First Conquest of an 8000-meter Peak). A book that has sold millions of copies and has been translated into 40 languages. Success on Annapurna turned out to be an authentic epic, a journey into the unknown because, led by Herzog himself, the French expedition's ultimate goal was still unclear at the start. Two 8000m mountains were in fact eligible candidates: Dhaulagiri and, of course, Annapurna. Knowledge about these mountains and logistics associated with climbing the Himalayan peaks were still in the early days, still needed exploring. As did a great part of the Nepalese region where these two giants lay.

Only after endless days of fruitless reconnaissance was the finally decision made, on May 14th, to focus on Annapurna. But precious time had been lost and the monsoon season was fast approaching. What lay in store was a race against time. And also a gamble, because they chose to climb the north face, steep and exposed to avalanches. On June 1 Herzog and Lachenal took over from Terray e Rebufatt and, with two Sherpas, established Camp IV. On 2 June, once again helped by a Sherpa, they established Camp V at 7400m. Then came the summit on June 3, via an exhausting ascent during which they battled with all their might against the technical difficulties of the climb and the effects of altitude. Completely spent they then made their way down the difficult descent. Other expedition members helped them during this dramatic return but both Herzog and Lachenal lost several fingers and toes as a result of frostbite. The other members of the expedition included the ace alpinists Gaston Rebuffat and Lionel Terray mentioned previously, highly talented Jean Couzy and young Marcel Schatz, as well as expedition doctor Jacques Oudot and film director Marcel Ichac. Herzog is the last member of this historic expedition to leave us. The mountaineering world has lost one of the last great climbers of that era.