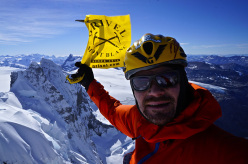 Markus Pucher making the first ascent of Into the Wild (800m, M5) up the hitherto unclimbed West Face of Cerro Marconi Sur, Patagonia on 16/04/2015.
Photo by Markus Pucher 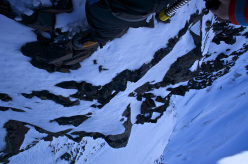 Markus Pucher making the first ascent of Into the Wild (800m, M5) up the hitherto unclimbed West Face of Cerro Marconi Sur, Patagonia on 16/04/2015.
Photo by Markus Pucher

On 16/04/2015 Austrian alpinist Markus Pucher made the first ascent of the West Face of Marconi Sur in Patagonia via his new route Into the Wild. Pucher's climb is only the second ascent of this mountain, after the first solo via the East Face carried out in 1995 by Antonio Taglialegne.

Despite its relative proximity to El Chalten, the Marconi range in Patagonia receives precious little attention. So much so that, until recently, Cerro Marconi Central was first ascended as late as December 2013 by Colin Haley and Rolando Garibotti, while nearby Cerro Marconi Sur had only been ascended once before, by the Italian Ragni di Lecco alpinist Antonio Taglialegne in 1995 who soloed the mountain’s East Face with one bivy. The West Face had been attempted in the past, notably by an Argentine expedition in 1982 and a French team in 1999, but both failed to reach the summit. On 16 April 2015 Austrian alpinist Markus Pucher decided to set the record straight by making the first ascent of the West Face and, simultaneously, only the second ascent of the mountain. He did so in a 6 hour roundtrip, free soloing the 800m line in just 2:50 hours past difficulties up to M5. The new climb has been called Into the Wild and comes just four months after his remarkable solo ascent of the Ragni route on Cerro Torre in a storm at the end of December 2014.

Markus, why this mountain?
I was in Patagonia with a good friend of mine, Thomas Bubendorfer, but unfortunately his foot was giving him problems and so I decided to try the West Face. I knew the West Face hadn’t been climbed before.

Presumably you’d thought about this in the past
Yes, I’d often thought about it, every time I walked below the West Face I thought that one day I’d try and climb it.

So tell us about the route
It’s completely alpine outing as I climbed it free solo. But it would have been hard to protect adequately, the rock is very friable and is only held in place by the snow and ice. The climbing is similar to that on the North Face of the Eiger or Matterhorn, just a bit shorter.

Well it’s 800m in total. And M5, climbed in only 2:50… sounds almost like a walk in park for you?
Yes ;-) I feel at ease on this type of terrain and obviously I’m also relatively quick. Of course, when you climb alone you’re always very quick. I believe my ascent was absolutely safe, conditions were perfect and I was quick, extremely quick. I managed to solo the entire line, both the ascent and descent.

That was on the 16th
On the day before Thomas and I wanted to climb something together on Cerro Torre but since he had problems with his heel, due to an old injury flaring up, I decided to make the solo ascent. After the climb I returned to my tent on the icecap, packed my gear and started the return to Chalten. I spent another night at lago Electrico and returned to El Chalten in the afternoon of the the 17th.