► News ► Alpinism ► Mario Merelli, goodbye to the alpinist from Bergamo 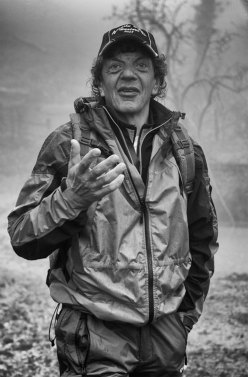 Mario Merelli, goodbye to the alpinist from Bergamo

18/01/2012. Mario Merelli died this morning at 8:00am while climbing up Pizzo Redorta (Val Seriana, Bergamo, Italy). Merelli was one of the most famous Italian alpinists and Himalayan mountaineers and one of the driving forces of the Bergamo mountaineering scene.

It happened this morning at 8:00, on Pizzo Redorta in Val Seriana. Mario Merelli died while ascending together with Paolo Valoti. More than this, we do not know. But as usual the news spread like wildfire. Mario Merelli wasn't any old climber in our world of mountaineering. And he wasn't any old body. He represented the heart and soul of the Bergamo climbing scene, he was a symbol of mountaineering. Born in 1962 at Vertova, he lived at Lizzola (Valbondione) 60km away from Bergamo and was one of the most famous Italian Himalayan mountaineers. He had climbed ten 8000m peaks and the latest, Dhaulagiri (8167m), dates back to 15 May 2010. He had climbed Everest twice. And, ever since 1998 and his first Himalayan expedition, he had amassed 18 expeditions to the Greater Ranges, often together with the another great Himalayan mountaineer Silvio Mondinelli. Merelli saw and experienced much up there in the mountains, including tragedies on the world's highest peaks. Such as on Annapurna in 2005, when he had to return by helicopter to recuperate his friend Christian Kuntner who had been buried in an avalanche. Perhaps this is another reason why his death, on his home peak, is even more painful. All we can do is salute and thank him, with the words and recollections of Manuel Lugli... Namasté Mario.

"The first time on Everest was in autumn, back in 1999, with just one climbing partner and no other expedition on the mountain: a superhuman undertaking. I met him then. The snow almost buried them down at Base Camp and they were forced to flee quickly and abandoned all their gear so as not to get stuck at Rongbuk. Since then a lot of snow has fallen onto the summits and Mario has become one of the most active and famous Himalayan mountaineers, during which he enjoyed a happy partnership with Gnaro Mondinelli and experienced the terrible blow on Annapurna in 2005. When not in the Himalaya he hides away deep in Val Lizzola, the blind heart of Bergamo's most genuine mountains. Physically he resembles a Norwegian troll, robust and with marked features, yet extremely gentle. In the evening at Kathmandu he always hits the town. Unsurprisingly, Mario has a natural talent to be liked."

This is what I wrote to describe Mario Merelli a few years ago and despite the fact that we didn't meet up that often, I think the portrait remains pretty up to date. Mario really was a gentle troll. One of those who you struggle hard to imagine having and hidden secrets, such was his immediacy when thinking and replying. Have a look at the interview done at the CNR Pyramid at Lobuch after his ascent of Lhotse: its a great, touching account of a non-heoe, of a strong alpinist who knows the beauty of friendship, of sharing and regretting when this is lacking. An alpinist who cries due to the cold and sheer effort on the icy slopes, and who is grateful for the warmth of a lodge, without feeling ashamed of the emotions which weld together important pieces of our lives.

Mario wasn't a superman, despite his 11 eightthousanders. Between one expedition and the next he worked in the family-run meublé in Val Lizzola, a man just like the rest of us. His Himalayan career had reached impressive heights, but the deep roots of the mountain man from Bergamo had remained intact. Perhaps it was due to his mountainous fibres that the high altitude Sherpa saw him as one of them, as an alpine Sherpa. Because these sentiments, almost animal-like, almost tangible, can be averted regardless of race and culture, regardless of all linguistic barriers.

His fall, right in the heart of his mountains, is a tragic symbol of his profound roots, a terrible seal reserved for Mario just as for numerous other great alpinists before him: Loretan, Berhault, De Marchi. A Lama would say that the mountain gods had wanted it this way. And perhaps the Tibetan fatalism summarises far better than any other expression the aspirations, effort, pain, success, disasters, lives and deaths of men in the mountains. And so I salute Mario with the classic Namasté, I salute the divine within him, that spark which, regardless of which religion one has or has not, makes you hold your head high and live life to the full.