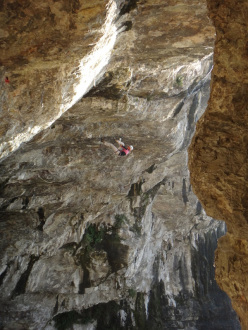 During the second week of February the increasingly popular Bus Quai Iseo in Northern Italy was visited by 26-year-old Czech climber Lucie Hrozová, a highly successful competition climber in the Ice Climbing World Cup and with many of the most difficult ice climbs and dry tooling repeats to her name, such as Illuminati and the M14+ Ironman.

On 6 February Lucie got to grips with the cave above Brescia and repeated, on her second attempt, Kamasutra, the D13+ freed by her friend Angelika Rainer and repeated by Jeff Mercier without using Yaniros. But her main objective was a different one: repeating Low G Man, freed by Mercier who climbed it without using Yaniro’s and graded it D14. After several attempts, on 11 February successfully redpointed the 45m outing! This is the second repeat and first female ascent. For both climbs Hrozová used the "Figure 4” technique, i.e.Yaniro, as she was keen to point out.