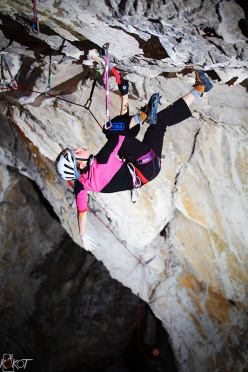 After having become the first woman in the world to send a M14 drytooling route with her repeat of Ironman at Eptingen in Switzerland in 2013, a few days ago the 25-year-old ice climber from the Czech Republic Lucie Hrozová confirmed her class by repeating another route this difficult. The route in question is Bafomet, located in the depths of a cave above Zakopan in Poland's Tatra mountains, freed in 2013 by Michal Król and subsequently repeated by Marcin Gasienica-Kotelnicki.

Hrozová's redpoint came about almost by chance. Due to the Rabenstein stage of the Ice Climbing World Cup being cancelled she suddenly had more time on her hands and so - after a good first flash attempt last year guided by the first ascentionist - on Sunday 9 February she managed to redpoint the line. During her 30 minute battle she was helped by numerous people in the cave who illuminated the route with their torches. Yes, because natural light never penetrates into the depths of the cave...

"It was Sunday and there were quite a lot of people there. I tied myself in to the rope and grabbed my ice axes. The cave fell silent. Suddenly all the lights were pointing at me, I felt as if I was on stage and I also began to feel slightly uncomfortable" Hrozová recounts "But I tried to push away the thoughts of feeling ashamed should I make a mistake and just thought "what the heck!" And much to my relief I succeeded in my aim, totally exhausted, of sending Bafomet."

Any advice for those who want to repeat the line? Wrap up warmly as in the cave "the seasons don't count – cold dominates, no matter what the temperatures are outside." Oh yes, one more thing: "don't forget to take a head torch and a spare set of batteries. Otherwise you won't see a thing."