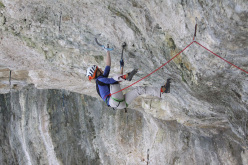 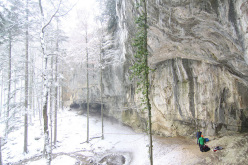 On 4/02/2013 Lucie Hrozova from the Czech Republic repeated Ironman M14 at Eptingen, making her the first woman to climb M14.

As far as drytooling and mixed routes go, there aren't many which are as hard as Ironman, the 40m stamina testpiece which breaches the enormous roof at Eptingen in Switzerland. Freed by Robert Jasper exactly a year ago, last Monday this wildly overhanging route was climbed by ace Czech ice climber Lucie Hrozová. If the grade sticks, Hrozová becomes the first woman to enter this realm of difficulty, upping the ante set by Ines Papert back in 2007 when the German made the first female ascent of an M13, Law and Order M13 at Diebsöfen in Austria.

Hrozová's success is the result of a series of visits to Eptingen and comes in the wake of other hard climbs such as Spiderman M13 (December 2012) and Superman M13+ (01/02/2013), both of which share the same start as Ironman. Her curriculum of hard ascents includes the likes of Illuminati in the Dolomites and yesterday Hrozová proved her worth once more by winning the 4th stage of the Ice Climbing World Cup in Busteni, Romania.

To get an idea of the route, here's the video of Robert Jasper during the first ascent.