Lino Lacedelli during the making of the film Rosso 70. The history and memories of 70 years of alpinism by the Cortina Scoiattoli.
Photo by Rosso70 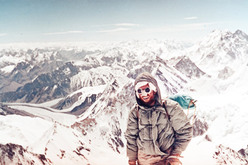 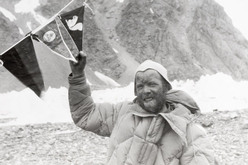 Lino Lacedelli, 84, passed away in Cortina, Italy this morning. In 1954 the member of the famous Scoiattoli mountaineering club became the first person to reach the summit of K2, together with Achille Compagnoni.

Goodbye Lino. A big, heartfelt ciao. He deserves it, the Scoiattoli from Cortina, Mountain Guide and ski instructor who linked his name inextricably with the first ascent of K2. It was on 31 July 1954 when he and Achille Compagnoni first set foot on the summit of K2, the mountain which, at 8610m, is second only to Everest but considered by all to be the hardest and most beautiful of the 14 highest mountains in the world. That evening, at 18.00 and after an endless battle, Lacedelli and Compagnoni reached the summit while the world's horizon seemed to wait patiently in order to exhibit itself in all its beauty.

K2 was a an immense undertaking and it received an enormous resonance not only in an Italy still getting to grips with the after effects of the Second World War, but also throughout thd rest of the world. As Lacedelli loved to repeat, this victory had been made possible only thanks to the sacrifice and efforts of every mountaineer taking part in that historic Italian expedition. Lino Lacedelli never had any doubts about this. "What counted for us was the group, it's thanks to everyone that we succeeded! I've said so in the past and will continue to do so forever!" I head him say just a couple of months ago. There can be no doubt that he was sincere, that he truly felt this way. Those who knew Lacedelli know how important the group values were. The most important thing for him were his friends, the other mountaineers, the spirit of the mountains. His 64 years as a member of the famous Scoiattoli di Cortina mountaineering club, amply prove this, and he remained one of the driving forces right to the end.

Born in 1925 in Cortina, Lacedelli began climbing and mountaineering at an extremely young age. He had an inborn love for his mountains and for the Dolomites and he was attracted to those peaks as a young child. So much so that he was nothing but a boy when, thanks to his father's momentary distraction, he followed a Mountain Guide and his client to the top of Torre Grande on the Cinque Torri. For this little outbreak the future first ascentionist of K2 and many other climbs in the Dolomites was reproached by the Guide (but consoled by the client who offered him a piece of chocolate) and a slap by his father who waited for him at the base of the mountain. By now though the die was cast and his road clear: his passion for the mountains and alpinism would never abandon him.

This is how his raids to the rocks and crags close to home began. At the time the first generation of Scoiattoli (founded on 1 July 1939) had already made a name for itself and those distinguishing red jumpers were the dream of all young climbers in Cortina. It was thanks to Luigi 'Bibi' Ghedina, one of the best 6th grade climbers of the era, who identified a potential champion that extremely strong young boy, deeply in love with the mountains. From that day onwards the partnership Bibi Ghedina and Lino Lacedelli began to produce one new route after the next, so much so that in 1946 Lacedelli was admitted into the ranks of the Scoiattoli.

The two Scoiattoli soon produced other "pearls" to be remembered, such as their fast repeat of the Costantini-Appolonio on the Tofana pillar. Or their 1952 masterpiece up the SE Face of Cima Scotoni, climbed by Ghedina, Lacedelli and Guido Lorenzi, another great Scoiattoli climber of that era. For many years this route was regarded as one of the most difficult in the Dolomites. And one mustn't forget the first repeat, in 1951, of the Bonatti-Ghigo route on Grand Capucin. Ghedina and Lacedelli climbed the route in a day and stunned the incredulous mountaineering world, confirming that "Dolomite climbers" were capable of great performances in the western Alps, too. In 1953 this ascent, combined with that on Cima Scotoni, were the passport for Lacedelli, Ghedina and Lorenzi the first selection process for K2.

Both Ghedina and Lorenzi were injured in 1954 and only Lacedelli was able to take part in that famous expedition to the mountains of all mountains. Lacedelli fully deserved his place there and his proverbial strength, constancy and tenacity combined with an immense passion allowed him to be a member of the team selected for K2. Once on the mountain he had the honour and duty to be one of the two alpinists who first touched that coveted summit. This was a dream which Lacedelli had earned himself throughout the expedition, proving not only his exceptional physical and mountaineering abilities, but also a human side worthy of great men. It was not by chance that Cortina and all his climbing partners were certain that, should one man reach this summit, it would certainly be Lacedelli.

Lino Lacedelli returned to Cortina laden with glory but also suffering from rostbite, which resulted in part of his left thumb being amputated. This did not stop him from climbing or taking to the mountains. In 1959 he carried out the first ascent of the beautiful and vertiginous Spigolo degli Scoiattoli on Cima Ovest di Lavaredo, together with Albino Michieli Strobel, Lorenzo Lorenzi and Gualtiero Ghedina. A year later he carried out another difficult first ascent on Punta Giovannina together with Strobel and Claudio Zardini. And for the rest of his life he never stopped exploring his mountains, the forests and being an alpinist and Scoiattolo.

K2 undoubtedly considerably influenced the life of Lino Lacedelli. It brought him fame like few others in the mountaineering world. It gave him joy but also bitterness. It's useless denying that he was profoundly struck but the episode which saw Walter Bonatti (rightly) claiming not only his fundamental role in the successful outcome of the expedition but also the historic truth of that ascent. Lino Lacedelli never kept his admiration for Bonatti a secret. In 2004 he told his side of the story through his book "K2, the price of conquest, written together with Giovanni Cenacchi. A story which celebrated its 50th anniversary that year and which Lacedelli wanted to remember also by travelling to the Base Camp of K2. After the long trek through the Karakorum Lacedelli reached the most important base camp of his life and encountered his Scoaittoli, there to climb the mountain and celebrate the 50th anniversary of the first ascent. Above all though, Lacedelli managed to bid farewell to his friend Mario Puchoz, his expedition member who had died while preparing the ascent route.

This return to 5000m and to K2, at a beautiful 80 years of age, is an impressive demonstration not only of the physical strength of this man but also his spirit. A spirit which, now that Lacedelli is no longer with us, will certainly accompany his friends, the Scoiattoli and all those who love the mountains.


>> TRAILER. ROSSO70 - The history and memories of 70 years of alpinism by the Cortina Scoiattoli.