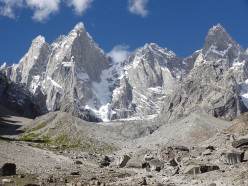 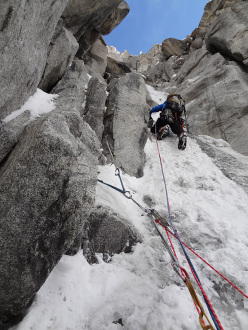 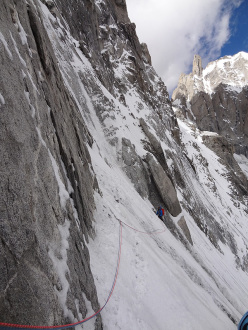 Between 18/08/2015 and 02/10/2015 our Polish expedition visited the unexplored region of Tagas Mountains in Pakistan’s Karakorum. The area is located near the village of Lachit, south of the K6 massif. We were the first expedition that received a permit to enter Lachit Valley as it is under military control.

Our expedition consisted of four members of the Polish National Alpinism Team: Tomasz Klimczak, Maciej Bedrejczuk, Marcin Wernik and Maciej Janczar. We knew each other very well, having climbed the main north faces in the Alps and many winter routes in Tatra Mountains together.

Exploration
During our one month stay in BC we explored two arms of the Lachit Valley. This is surrounded with beautiful mountains, approx. 6000m high, and we e took many pictures and aerial films with a drone. We also managed to climb two virgin peaks. The first summit was an easy acclimatization ascent, which we called Goat Peak 4991m.

Dream Walker Peak
The second mountain was a real climbing adventure with an unplanned bivi and unexpected weather breakdown. The route was climbed in two days in light alpine style without bivi equipment. We have called the mountain Dream Walker Peak 5809m and named the route Rolling (D)Ice. The crux of route was AI5 ice pitch with a 15mm unprotected ice layer. The descent followed the route, via 14 abseils from ice threads and pitons plus some down-climbing. We reached our advance basecamp at 5000m in the middle of the night, accompanied by constant snowfall.

Polish Couloir
Our third objective was a mountain located on the right of our BC. This soaring tower appeared difficult from all sides, with airy ridges and a pointy summit – a great dream for all mountaineers. Because of its character we gave it a working name - the Ogre. Looking at it from our tents made us utterly convinced that reaching this summit would be the main goal of our expedition and the essence of the alpinism we know and love. Our Ogre had a promising ice couloir on the north-east face and this was also easily accessible from our BC. We established Advance Base Camp at 4500m at the foot of 1.5km high face, then climbed the couloir in 3 days, having endured two sitting bivis on snow ledges.

On the third day we reached the saddle at 6004m. Obviously we planned to keep going onto the summit. It was about 3.30pm and the weather turned bad. We could not see the ridge unfold ahead and decided to check the forecast with basecamp, and were warned that the next day would be the last day of decent weather. A serious weather breakdown was predicted for the next few days. We would need one full day to get to the summit and return to the saddle, and this meant we would have to abseil down our couloir in heavy snowfall and therefore be exposed to avalanches. There was really no choice. We started to abseil and reached our first bivi late at night. The following day we continued abseiling and reached the glacier in the afternoon, making a total of 27 abseils from the saddle. At about 17.30 we reached our BC.

That night it started to snow heavily and continued for the next couple of days. We did not see the mountains but could hear a roar of avalanches every few minutes. It convinced us that we made had made a wise decision up there on the saddle. When the weather improved we returned to retrieve our tents on the glacier, and found them fully covered with snow, with broken poles. The route has been called Polish Couloir. It ended at the saddle. The summit of this Ogre remains unclimbed.

After this route winter arrived in the Karakorum, putting an end to our expedition. During our stay we saw many beautiful peaks that are just waiting for their first ascents. The character of these mountains resembles alpine climbing including some fun ice, mixed and dry tooling sections. We believe Lachit Valley holds a great potential and that future expeditions will enjoy unforgettable mountain adventures here.