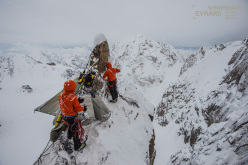 "Sean has a bad case of diarrhea, Nico has a bit of a sunstroke and is vomiting, Stéphane has a bad headache and Evrard has a sore back. So nothing unusual to report really." This is how day one began at base Camp for Sean Villaneuva, Nicolas Favresse, Stéphane Hannsens and Evrard Wendenbaum, the four members of the French-Belgian team that at the start of September reached the base of Kyzyl Asker located in the Western Kokshaal-Too range on the border between China and Kyrghyzstan.

Fortunately for the four alpinists their expedition - called China Jam - turned out far better than this start and at 10:00pm on 22 September all four reached the 5842m summit via a route up the South Pillar that, at times, shared some pitches with the 2007 Russian route. Details as yet are few but intense cold down to -15°C, more than 15 days on the wall, 1200m of climbing, beautiful pitches between 6a and 7b, fixed ropes, 3 portaledge camps, poor health, snowstorms, and complicated mixed terrain are the main ingredients these climbers faced on what is certainly their highest - and coldest - adventure to date.

Writing to Planetmountain.com Favresse commented: "Generally it was quite a tough expedition because of the cold and weather conditions. It was a lot colder than on any other big wall I had climbed before. Even on a good day when the sun was shinning temps would stay below -5 in the shade and by night about -15 plus the days were already quite short. As to the climbing, the rock was fantastic, technically not so so extreme, the hardest pitch of the climb is 7b. There was also a beautiful, slightly overhanging splitter crack which Sean worked on and almost did, but in the end we remebered we weren't at the crag and skipped this with a easy variation as we had to move on upward... The last 3-400m were all mixed climbing and I believe some of the mixed pitches we did were around M7-M8."

A full report will follow shortly, in the meantime for more information check out www.evrardwendenbaum.com