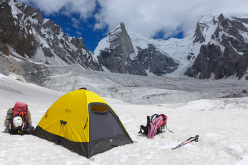 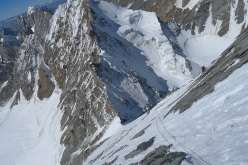 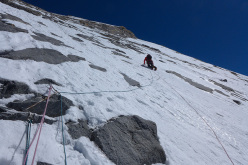 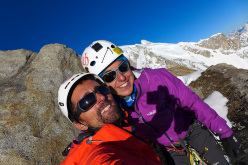 From 6 - 9 September Daniela Teixeira and Paulo Roxo made the first ascent of Kapura South, a beautiful 6350m peak located in Pakistan's Nangma Valley and a sister summit of the main Kapura Peak (6544m). The two climbers from Portugal climbed a 1300m line up the SW Ridge past difficulties up to M4 and 70° ice and theirs is the first route from the Nangma Valley. Kapura's main summit was first climbed in 2004 by Doug Chabot, Steve House, Bruce Miller, Marko Prezelj and Steve Swenson from the Charakusa side, while in 2009 Marek Holecek and Jan Doudlebsky added another route from the same side, namely Wild Wings (1300m, WI5+ M7, 70°).
Teixeira and Roxo opted for the Nangma valley for two reasons: firstly because no permits and liason officer are needed for peaks below 6500m making the trip more affordable, and secondly because before their departure they had found precious little information about the valley. "The fact that we did not find any photo or information about the end of the valley, about the the glacier cirque where Kapura and K6 are located, piqued our curiosity" explained Teixeira to Planetmountain, adding "We knew we would have a lot of possibilities to establish a big route, either a big rock climb or a long alpine outing. And this is exactly what happened."

It was our first trip to Nangma Valley and we had no exact objective in mind, although we aimed to climb a new mountain route in light style or at least some new rock route on the big-walls there. In our investigations before the departure, we didn’t find any information or photos of the most inner part of the valley, so our expectations were high.

On our first reconnaissance trip, we immediately found our goal. At the bottom of the last glacier, on the left side of K6, there it was, a beautiful peak with one amazingly elegant spur leading all the way to the top of Kapura south. That became our dream route. It looked a line with no apparent objective hazards like seracs, avalanche prone slopes or falling rock.

Between 25 and 27 of August we made our first acclimatization trip, where we explored the glacier finding a really nice and quick way, quite straightforward to Kapura’s foot. This was the first good surprise. Only 1 hour and 30minutes to cross the glacier!

On the next day, at 4a.m. we started to climb the first part of the route leading to an evident col on the southwest spur of the mountain, where we left a small food deposit. We easily scrambled the first 200m and after that we climbed 6 pitches of ice, snow and easy mixed climbing. Abseiling down, with the sun already hitting the wall, we realized there were two dangerous passages, two traverse pitches extremely exposed to permanent rock fall. To be safer, in the ascent we would cross these sections at night. We knew that this first climb and acclimatization on the route would invalidate a proper alpine style ascent. Nevertheless, we didn’t fix a single meter of rope, and on the summit attempt, we had to climb everything back again.

After some days of bad weather, we had the information that from the 5th to the 11th of September the weather would be perfect, a lot of sun and almost no wind. On the 5th, we left base camp reaching the tent in the glacier, at the base of Kapura in about 5 hours.

On the next day, at 3a.m. we left the glacier and carried the bivy tent and all gear all the way through the first 500m of the route, repeating the recognized line to the col, which we named after the name of our son’s cook – Alam’s col (5700m). At the col, we barely manage to build a pretty decent platform to place our small bivy and, always attached to the ropes, we rested for some hours to prepare the summit attempt.

At 1:30 a.m, we started to climb the second and main part of the route. We found a steep face, 60-65º, with hard ice beneath a thin layer of snow, left by the previous days of bad weather. Those conditions forced us to belay all the way up. After some 500m of mechanic ice-climbing moves, at 7:00 a.m. we reached the rock band slightly above midway. There, we had to traverse to the right searching for a passage, and then again to the left, gaining the second ice slope, which we reached around 12:00. On the 5 pitches traverse the good ice was replaced by an unconsolidated thin layer of snow plastered on the rock, which made for some nervous moves on mixed ground.

The last part of the climb took us a lot of time, and in some moments we thought about which way to go…up? Or wown? Because it was starting to be obvious we would have to get down at night... It was past 2p.m. and a night descent was seriously on the prospect. Finally we decided to go up, trusting mainly on the good weather forecast and on the perfect ice conditions to abseil on threads (Abalakovs).

At 6:00 p.m. we reached the unclimbed south summit of Kapura, and calculated an approximated altitude of 6350 m. We didn’t have GPS to check the actual altitude, so we estimated it later, comparing the altitude of the main summit of Kapura (6544 m) with the one we climbed, and considering the length of our line of ascent and the medium slope angle.

On our descent we left slings on Abalakovs and some pitons on the rock band (glad we could find decent cracks during the dark night!). At 3:15 a.m we finally reached our tiny bivy at Alam’s col, 25h45 minutes after starting. Thirsty and tired, we decided to relax for the rest of the day, and at 3:30 a.m. (to avoid rock falling danger between Alam’s col and the glacier) on the 9th September; we started the descent to base camp, which we reached at 11:30 a.m., eager for having lunch!

On the way, our cook Altaf was waiting for us at the end of the glacier and we found out that he spent all of the summit day looking at the mountain with binoculars; following us all the way to the top (his eyes were still red!). We called this new route "Never Ending Dreams", 1300m, 70º/M4. This was Kapura’s first route from Nangma Valley side.