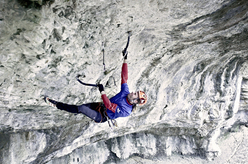 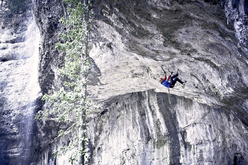 Robert Jasper has added a new total dry route to the Swiss winter crag Eptingen by freeing Ironman, a 40m stamina testpiece which breaches the enormous roof and combines three existing routes: Superman M13+ and Batman M12, to the finish up Winner M11-.

Jasper freed the pitch perhaps slightly ahead of schedule, or rather, in a winter which was "too warm at first, then too cold" which meant that Ironman is nude, completely without ice. "But drips are beginning to form now, it'll be great to see how it all develops" commented Jasper who has graded the outing D/M14+.

The crag at Eptingen has been developed primarily by Wolfram Liebich but Jasper has played an important role, too: in 1997 the German established Trait de lune M8+, while Batman M12 was added in 2003, Superman M13+ and Spiderman D13 in 2009. Eptingen currently hosts circa 20 routes from M6 to D/M14+ and the video posted below gives a good idea about the size of the cave.