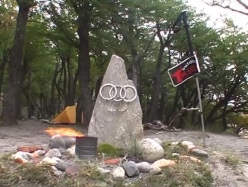 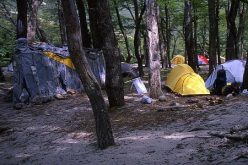 The video of Belgian alpinist Sean Villanueva documenting the so-called ‘International Olympic Games of Campo Bridwell’, held below Cerro Torre in Patagonia in 2006.

Until only a few years ago, Campamento Bridwell in Patagonia was the focal point for the best alpinists in the world who spent weeks and months on end waiting for the famous weather windows to arrive so as to climb Cerro Torre, Cerro Fitz Roy and all the surrounding peaks. Nowadays the mountaineers reside more comfortably at El Chalten, the increasingly reliable weather forecasts arrive via the internet and what remains of those wooden shacks that welcomed generations of climbers is nothing but a beautiful memory. To give an idea of the spirit that prevailed in that "Campo", here is this fun video, published recently by Sean Villeanueva.

The Belgian climber explains: “The end of the 2006 Patagonia season seemed to have arrived and most climbers had fled to warmer destinations. Only a few fanatic alpinists remained, hoping for one more weather window and a chance to attempt their dream line on the mythical Patagonian peaks. Snow, rain and wind came and the climbers festered at base camp for weeks without end, but the weather window never came… (This was still in an era when climbers actually stayed at basecamp). To keep spirits high, and as training for the mountains the “International Olympic Games of Campo Bridwell” were organized (Base camp for Cerro Torre). Some of the most legendary climbers of history fought hard for the glory. With names like Thomas Huber (Bavaria, Germany), Toni Ponholzer (Austria), Markus Pucher (Austria), Dodo Kopold (Slovenia), Andy Schnarf (Switzerland), Long John (USA), Aurelia Dapremont and Anna (Argentina), Nicolas Favresse (Belgium) and Mike Lecomte (Belgium) himself, it was world widely accepted that whoever won this event would be the best of the best...”

18/07/2003 - Trekking in Patagonia
Trekking in a magical and mysterious land: three magnificent walks around the Torres del Paine, Fitz Roy and Cerro Torre, the stone heart of Patagonia.