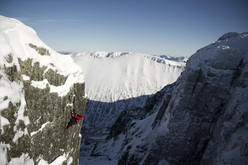 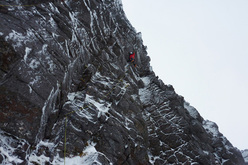 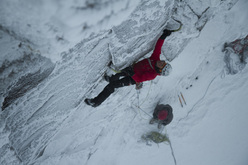 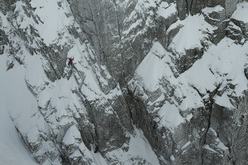 During a week winter climbing in Scotland, Ines Papert and Charly Fritzer have established Triple X, VIII,8 on Ben Nevis and Bavarinthia IX, 9 at Coire an Lochain in the Cairngorms.

After last year's baptism of fine, German alpinist Ines Papert returned to Scotland at the end of January together with Charly Fritzer from Austria where she carried out a string of important repeats, including the first repeat of "To those who wait" IX, 9", first climbed by Boswell and Sim high on Ben Nevis. Despite poor conditions they also managed two first ascents: "Triple X", VIII,8 on Ben Nevis - climbed along with Dave MacLeod, following a weaving line the Scotsman had scoped during his attempts of Echo Wall – and "Bavarinthia" IX, 9 at Coire an Lochain in the Cairngorms.

Just like last year, what struck Papert most wasn't the infamous poor weather but the fact that so much can be done without the use of bolts. "Climbing in Scotland has really helped me change my attitude" she told us, adding "my focus is definitely on as much trad as possible, not only in the Alps but also in the Greater Ranges, and our route on Kyzyl Asker is very much in line with this."

Her report is published below, as well as a video from her 2010 trip which gives a fantastic idea of the winter climbing there and shows how she earnt her "Scottish wings".

After my first trip to Scotland in 2010 I was anxious to get to work on the harder routes and maybe even climb a few of them, but the mystic aura, the strict ethic-code and my huge respect for the traditional winter climbing was still there, deeply ingrained in my mind.

A few weeks before we left for the North I contemplated about all this. At the end of the day it's really all in your head: your mental strength is essential, and I knew that my inner-self was ready for an other awesome trip to Scotland. I no longer had nightmares about ground falls, I just dreamt about climbing more harder routes than last time, when we had been so lucky with the weather and ice-conditions.

I was highly motivated but a few days before departure my climbing partner suddenly cancelled his trip. Perhaps this was due to the bad weather, the cold temperatures or the strong winds, but the fact of the matter is he decided to spend his winter holidays in summerly Thailand instead. A bit hard to understand and disappointing, but these things happen and so I asked a good old friend of mine, Charly Fritzer from Austria, to join me. Sometimes you just have strike lucky and two days before we left he said yes. And just like last year, young gun and aspiring photographer Hans Hornberger joined us with his camera.

Our friend Ian Parnell helped us a lot. Again it was he who got us in touch with local climbers and collected information about the routes to climb and the ice conditions. I wanted the local climbing scene to be an important part of our trip and meeting old and new Scottish friends by accident in a lonely car park in the middle of nowhere made us feel like being at home.

This year we weren't as lucky as last year with the weather. But sometimes you just have to kick yourself in the butt and get outside in the early morning, even when rain and wind make you want to decide differently and a warm BigTree Campervan awaits. But that's part of the game, another mental game. Because up there you cannot just wait for the clouds to clear and the sun to come out. It might take weeks…or even longer...

On our first day in Scotland we got lost in the fog and rain, we didn't even find Coire an Lochain in the Cairngorms. We had heavy rainfall, strong winds and no visibility whatsoever and our mistake was to not take a compass with us. On the next day we went up again with local climbers Pete Macphersun and Greg Boswell, both of whom are highly talented climbers. Pete and I on-sighted “Daddy longlegs” VIII, 9 while Charly und Greg went up “The Ventricle” VII, 8

The next day greeted us with awesome weather. The sun was shining and after the usual three hour approach-hike Charly and I repeated a fantastic route on Ben Nevis: “To those who wait" IX, 9. 20-year-old Greg Boswell had established the route only a few weeks ago and he invited us to make the second ascent. "To those" is a fantastic, spectacular overhanging crack with more or less good gear placements along the icy crack. We figured out that hexentrics were safest pieces of gear and while I took one fall, Charly managed the redpoint.

On the top of Ben Nevis we met Dave Macleod by accident and decided to join forces the next day. Fortunately he owns the "magic key" which opens a barrier on the way in. This shortens the approach-hike a lot and the climbing/hiking ratio suddenly becomes much better. Together with Dave we established a new route which finishes up a big chimney first climbed by Ian Parnell and Ian Smallbouth, two good friends and strong climbers. We called our route "Triple X": we were a team of three and the route has three fully stretched pitches.

My personal highlight of the trip was a new route climbed in the Cairngorms. We were joined by our friends Simon and Neil who opted to climb the nearby “Falling out Corner”. As Neil took a huge whipper right next to me, I lead the crux pitch and tried really hard not to fall onto the little gear I had managed to place on my way up. Right in the roof, half-way up the pitch, my feet slipped and my ice tool popped off. The second tool just kept stuck where it was and with one last power-move I managed to pull myself in position again. Although the gear-placements were bad, the climbing great. After at least an hour on-sighting the first 30m I finally established a belay and Charly seconded this pitch, in his usual fast style. he quickly sped up the second, easier pitch to the top. We called the route "Bavarinthia" IX, 9, because I'm from Bavaria and Charly is from Carinthia.

There's one more thing that climbing in Scotland really makes you aware of: we, the so-called “alpine climbers”, really need to think hard about drilling and bolting. Bolting routes from top to bottom isn't always necessary, even - like in Scotland - when the rock isn't totally solid. If we want to keep the adventure factor in there, then we must agree on a code of ethics when we establish new routes. It's all about keeping our eyes and mind open and establishing new routes in a traditional way, or at least with a minimum use of bolts. We have to take part in this discussion and raise awareness, first and foremost in the European Alps.

Without the help and support of the Scottish climbers we would not have climbed this many hard, great routes. Thanks again for your help, friendship and support: Ian Parnell, Simon and Sarah Yearsley, Greg Boswell, Dave Macleod, Pete Macphersun, Michael Tweedley… and more.