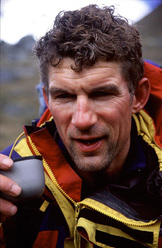 Pavle Kozjek after his solo first ascent of the route No fiesta hoy dia on the South face of Huandoy South, Cordillera Blanca, Peru, 2001.
Photo by Urban Golob

In memory of Pavle Kozjek

Pavle Kozjek was officially declared dead on 11 September after disappearing on Muztagh Tower on 25 August 2008. A commemoration service will be held on 17 September in Ljubljana, Slovenia.

Unfortunately the inevitable official statement has now arrived: on 11 September Pavle Kozjek - the strong and much loved Slovenian mountaineer who went missing on Muztagh Tower on 25 August while attempting a new route up the unclimbed North Face together with partner Dejan Miskovic - was officially declared dead yesterday. With the loss of Pavle the mountaineering comunity looses not only one of its greatest representatives, but also someone who knew how to live out his extreme passion without ever forgetting his humanity and values of solidarity and friendship.

This is how his friend and climbing partner Urban Golob remembers him.


Pavle Kozjek (1959 - 2008) by Urban Golob
When I first went for a round of climbing on Ljubljana's Roman Wall, the popular »outdoor gym« in the eighties, there was a yellow bike leaning on it. Not far away a climber was climbing on tiny holds - he simply did not touch the bigger ones essential for us beginners. The climber was something special. I watched him from a distance, how he danced on the most difficult parts of the traverse. After that I met Pavle many times while I was attending climbing school at the main climbing club in Ljubljana. Although he was rather quiet, during the meeting with the alpinists Pavle filled the room with his personality. At that time I knew what he had already climbed but, as a beginner, I did not fully comprehend the value of his bold ascents. I hardly dared greet him. Even in my wildest dreams I did not think that one day we would team up on the same rope and climb together.

But some years ago exactly this happened. Since then we climbed together on numerous occasions in the mountains as well as at the crags. We also went also on two expeditions together. Pavle once said in an interview that he liked to climb with those climbers most who feel about mountains in the same way as he did. Reading that I was somehow honoured to be among his climbing partners - and friends. One day I met well-known climber Greg Child. We talked a lot and when we spoke about climbing partners and especially expedition mates he said that you remember your climbing friends because of how you enjoyed their company, not by what they climbed or by how good a climber they were at the time. I could say the same about my friendship with Pavle.

But in Pavle's case you simply cannot avoid his impressive list of climbs all over the world from his home Slovenian Alps to the Peruvian Andes, Karakoram and the Himalayas. Everest without O2, two 8000 meter peaks (Broad Peak and G II, in 1986) in just five days, a winter bivouac at 8000 meters on the slopes of Dhaulagiri without any gear, a new route on Cho Oyu in just 15 hours and numerous fast solo first ascents in the Peruvian Andes. Many Slovenian alpinists regard one of Pavle's highlights his numerous solo climbs (both ascents and extreme descents) in the Slovenian Alps which are full of loose, or at least questionable, rock.

With his impressive climbing career Pavle could have easily been a fulltime professional alpinist but he once said that he was not interested in this at all. He added that climbing was his predominant thought as a college student but that he now enjoyed his job (he was M.SC software developer and department head at the Slovenian Institute of Statistics) and that the family was his first choice (his wife is a well known Slovenian doctor and triathlist, his daughter an excellent swimmer). Somehow Pavle managed to find time for running, too and he participated in many marathons which he regularly completed in under 3 hours. Weekends were therefore almost the only climbing opportunities he had... yet his climbs were at the highest of standards. As Marko Prezelj once said “Pavle manages to strike the balance between commercial approach and a climber's approach with dignity.” Pavle himself had a clear opinion about this: »I don't like to sell myself at any price, but I have nothing against showing the quality of the climbs I do.«

Although a quiet person Pavle was world-famous alpinist. He was respected because of his visionary climbs but also for his humanitarian approach. To help others came naturally. Pavle was the man who published photos of the shooting on Nangpa La two years ago when a nun died under the fire of Chinese army. Pavle reflected “...my opinion is that climbing without humanity and ethics is not climbing any more - these two things are essential and they make climbing different.”

Pavle and myself had some common climbing plans for the near future. This year bad weather prevented us from climbing in the Dolomites, we also failed to climb a new route on the Prisojnik NW face (Julian Alps) since we had forgotten the pegs in car, nevertheless we managed to repeat his first ever new route (dated 1980) on the short but steep face of Kogel in Kamnik Alps.

I know I can no longer listen to his stories about his early climbs, his rather wild climbing parties in the early eighties and moments from his childhood on a small farm near Ljubljana any more. We can also no longer make our climbing dreams come true. But I'm certain that we'll tie into the same rope, some other time and in some other place.