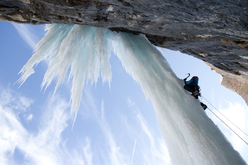 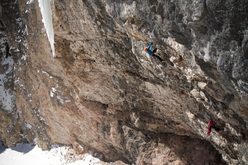 Illuminati in Val Lunga for Ines Papert and Lisi Steurer

On 27/01/2012 Ines Papert and Lisi Steurer carried out the first female ascent of Illuminati, the incredible mixed route established by Albert Leichtfried in 2006 up in Val Lunga, Selva Gardena (Italy).

"At times you really need to know how to wait for just the right moment". This is what German alpinist Ines Papert told planetmountain after her long, nigh six-year wait which finally resulted in the repeat of Illuminati, the superb mixed route established by Albert Leichtfried in 2006 and graded an impressive M11+ WI6+.

Papert knows Illuminati well: she had first caught sight of the drip back in 2006, together with first ascentionists Albert Leichtfried, but when the time came to repeat the line, the ice on the upper section wasn't good enough. Papert returned for a second attempt three years later together with Kurt Astner, but this time the characteristic - and dangerous - drip hadn't formed enough, while plans were foiled in 2010 together with another ice climbing ice - Angelika Rainer - since the temperatures were too low: climbing M11+ at -20°C with thin gloves was simply out of the question. Illuminati had captured Papert's imagination, it remained a dream until this year when, thanks to a call from South Tyrolean guide Hubert Moroder, the right moment finally came about.

Papert walked up Val Lungo on 27 January together with Austrian Guide Lisi Steurer (the two have climbed much together in the past, and in Canada's Cirque of the Unclimbables established Power of Silence). "Tension grew" explained Papert "and I couldn't wait to see the route. Finally we stood at its base, it was like a dream. Glazing blue ice, the sun shone over the mountain tops, the temperature was a bit too warm for this time of year. But I felt that I might succeed."

The route begins with a 30m M11- which leads to the roof, and this is breached with a crux pitch which leads up into the ice. "This time I climbed the roof straight off. We then climbed the ice pitches when the sun had dipped behind the mountains. We didn't want to take any unnecessary risks, every now and then drips of ice fell down close to us" explained the German. She added "I was right opposite the drip, 30 meters high and with circa 1 meter wide. My stomach shut down. 20 meters of vertical ice lay in story, without any ice screws... would my nerves hold?" The answer came quickly "I listened to my inner feeling and had good sensations. I started to climb, higher and higher to above the point where it could have ripped and... finally placed the first good ice sceew. The other pitches followed, we reached the top and shouted for joy. Lisi for having passed her final Master's exam, me for having passed Illuminati."

With this ascent Ines Papert and Lisi Steurer have carried out the first female ascent of Illuminati and theirs is probably the third repeat, after Florian Riegler in 2008, and Erik Svab and Klemen Premrl that same year.