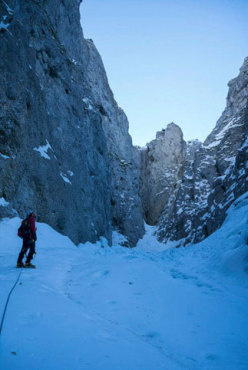 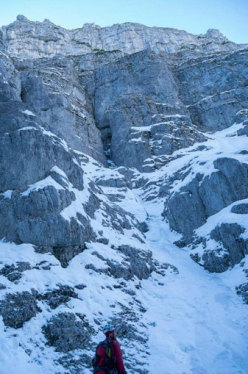 The gully winds its way up the right to reach the series of ledges and mixed terrain that lead past the overhanging Grande Salto.
Photo by Cristiano Iurisci 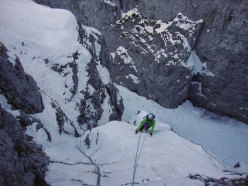 Massimo at the end of pitch 2
Photo by Cristiano Iurisci 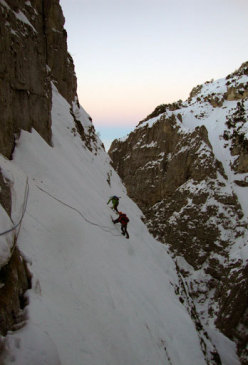 The final metres up pitch 4
Photo by Cristiano Iurisci

Valle inferno. The valley of hell. It's a name that, at least in Italian, is almost onomatopoeic. It penetrates and reverberates though the mind. It's a name that needs no complex topographic explanation as to its origin. The name alone explains everything but, at the same time, explains nothing because up there, deep in this and other similar valleys, everything is more difficult, distant, impenetrable, incomprehensible, hard to observe and, last but not least, more dangerous even. It's a name that indicates steer clear.

There are a few "valleys of hell" scattered across Italy, even within the small Apennines area, but some are certainly more hellish than others. If Gran Sasso's Valle inferno is all of the above, complex, difficult, impenetrable, etc., then Majella's Valley of Hell is even more si: remote and hidden, almost invisible, so much so that at a quick glance reveals nothing at all, least of all its size and depth.

These factors make Majella's Valle inferno one of most secretive, least explored valleys in the Apennines. During the last century, at least up until the '50s, the valley was known only by poor shepherds who were forced to graze their sheep on its small and steep slopes overlooking Valle inferno as Majella offers nothing better. Sheep herding in was almost the only source of income for the Majella locals. But after the war, and in particular after the 1970's economic boom, everything changed and the first pastures to be abandoned were those above Valle inferno. Today their existence is locked in the memory of only a few elderly Pennapiedimonte villagers.

In September 1986 the valley was descended for the first time by mountaineers from Chieti who abseiled down it. The news caused quite a stir, so much so that it was published in the local newspapers since the valley was considered to be completely unexplored. Some shepherds claimed they'd visited the upper section but lacked proof. One even stated that one of his ancestors had climbed up the entire valley! Crazy! Absolutely impossible! was the reaction of the first who descended the valley and also that of those who subsequently repeated this fear. Of course we will never know whether this is true or simply the result of someone's lively imagination! It's hard to think that a shepherd climbed up improbably steep ledges to save his sheep, or to flee from danger (thieves perhaps?). We will never know.

Majella is located just a stone's throw from home and this valley has always represented the final unknown, the last frontier that stores intimate secrets of Mother Mountain, as the Majella is also referred to. The was known and the few photos taken from within exerted an irresistible call: I wanted to go there, I had to go there.

Years go by and I give Valle Inferno various goes, at first alone but a waterfall stops me, then together with Fabrizio but after the waterfall a small glacier (in October) completely blocks the valley. I understand that to ascend the valley one needs to take advantage of the enormous avalanche debris that fills the various steps, waterfalls and gorges, weathered smooth by the water and nature's forces that, here, are always bigger and devastating. In mid-May this year Massimo (Zulli) and I give it a go; burdoned down with rope, axes and crampons we make the first ascent of the valley up to the big 80m drop that bars access to the steep meadows and scree slopes that lead on up to Carozza. Continuing onwards seems impossible, and since this isn't our intention we retrace our steps and descend, fully enjoying the ambient and completely bewildedred by the size of the place. A few months later (in November) Massimo and I return to measure the small glaciers (the southernmost glacial remains in the Apennines) that, despite global warming, still exist in this deep and remote valley. We also take with us climbing shoes in order to climb past the Grande Salto, the Great Leap, that blocked us in May. After the first waterfall we start using our ice axes, crampons, rope and ice screws (!), breach the prow of ice and continue upwards but, on reaching the darkest and narrowest section of the valley, where it bends into a "S" shape, a 15m high, smooth rock step bars our way. I try to hammer a peg and climb it but quickly realise that I'll need at least an hour to get past those 15 metres. Add to this the time needed to climb the face above and what we had was too little time and too small a safety margin to get back before dark! The valley is long and we needed over 6 hours just to get to this point! So the Great Leap remained unresolved.

In July 2012, once again with Max, we do a reccy trip from above! We climb to Martellese, then descend from Carozza to Dito Del Diavolo, the Devil's Finger, a daring spire that looms above Valle Inferno. From this vantage point we carefully observe the Great Leap. And come to the conclusion that it's possible to ascend on the right, but not on the rock itself, but up the nigh vertical grassy cliffs that abound in Majella. We estimate two, maybe three pitches! We also "discover" some bold pens, built by shepherds and abandoned over 60 years ago. Some still contain embers, silent witnesses to a long-gone era. Most villagers at Pennapiedimonte ignored the existence of these buildings, only some elders confirmed that shepherds from Puglia had used these, and the other remote and inhospitable ones in the Majella. So now all we could do was wait for winter to come and for the snow to fill the cavities and gorges.

December finally came and with it abundant snowfall followed by rain and sirocco wind, resulting in safe conditions in a valley usually used to daily avalanches and rock fall. i phoned Massimo who was exited, and then Antonio, a young climber from Guardiagrele who'd often asked me to take him on one of mix ice climbing adventures. Asking him along on an adventure like this was a bit risky, but he'd often talked to me about his mountaineering ideals and dreams and he was also technically sound - these factors are increasingly hard to find in the new generations. Furthermore, I never imagined that the climb would be so long and difficult, and I even worked for an hour before heading off to Pennapiedimonte and Massimo had to return in time for his night shift at the hospital!