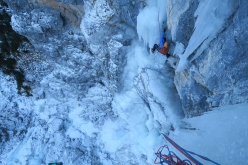 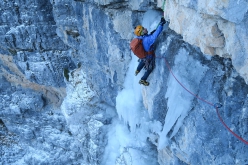 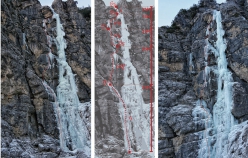 For the last few winters, whenever I walked below Gran Dama I noticed this interesting line of rock and ice that runs parallel to what is probably the queen of Val Pramper.

It always seemed such a logical and obvious line to me that I was amazed no one had thought of climbing it before. So, last winter when the temperatures began to drop, my usual curiosity returned. Without any previous reconnaissance I decided that the time had come to give a go. I’d discussed my plan with my friend Matteo, who, when the time came, didn’t need to be asked twice.

January was a perfect time to climb - and above all to establish a new route - in Val Pramper. The snow hadn’t come yet but there was already plenty of ice. Which translated into a multitude of new lines with short and dry approaches, just like summer cragging!

So one morning in early January we reached the base of the icefall. The line had formed! It looked a little thin, but nevertheless it was beautiful and irresistible. The first pitch runs parallel to the first part of Gran Dama, up not too difficult ice. Unfortunately a team was already on Gran Dama, sending large amounts of ice down into the valley and forcing us to wait more than an hour at the base.

After this discharge I quickly joined Matteo at the first belay and immediately started up the mixed section on the crux pitch. A few sections of dry tooling, following by some trad protection, led me onto some ice again. Some crusty ice followed, I placed a bolt and subsequently lowered off, leaving Matteo to finish off the pitch. Another great pitch followed, with a mixed start and an easy finish. At this point the time we’d lost in the morning caught up with us and due to the impending darkness unfortunately we had to bail a pitch from the top. We returned a few days later, to finish the route with a thrilling pitch to say the least, exposed and by no means straightforward.

The rest of the winter passed by with other commitments and projects. But we kept thinking about returning to make a free ascent from bottom to top, to enjoy the fruits of our work (and also to add an interesting variation). So we tried, on more than one occasion, but the abundant snowfall and high February temperatures forced us to give up. The route was beginning to earn its reputation, in line with the name we’d given in.

All things considered I believe this route become a classic mixed outing, never trivial but not too difficult either. The line changes continuously throughout the season, making it fun and different on each occasion. It’s for the repeaters to judge, but we believe La Piccola Sgualdrina , The Little Slut, is a truly unique line!