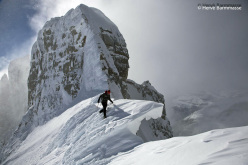 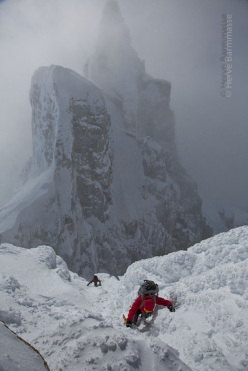 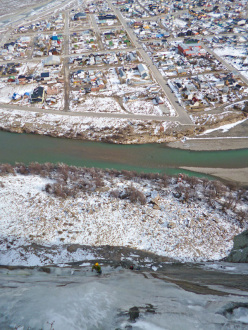 Hervé Barmasse, you have come back from Patagonia with three first winter ascents, two of which are absolute first ascents. What else have you brought back, I mean, what do you remember the most?
Certainly the idea that in Patagonia winter climbing is (lucky for us) right at the beginning. In the future it will constitute a new chapter in the history of these mountains. The cold opens up new possibilities, making it possible to reach summits which are impossible in summer due to the instability of the rock.

What was your initial idea (Didn’t you intend to climb alone) and how did it then work out?
My initial aim was to try a difficult solo ascent on a peak which hadn’t been climbed in this style, not even in summer. My motivation, crucial for this type of climbing, was very high, and I was also finally in very good physical shape, after a long stop due to two cervical disc bulges. In certain cases, though, motivation and fitness aren’t by themselves enough, and so, given the bad weather and poor conditions on the mountain, I had to abandon my project, but instead of coming home early, I made other ascents. The result: these three first winter ascents, of which two of virgin summits. For my first winter climbing in Patagonia, I think this is a good result and the experience gained has helped me to understand better the limitations and difficulties of the Patagonian winter for future projects

So, tell us about the first of the three… how did you choose it, and what were the highlights?
The first was the winter ascent of Cerro Pollone. With me was Martin Castrillo, who I’d met only a couple of hours before the departure at El Chalten, during some interesting ice climbing. We climbed with skis from the “Cuadrado” pass to the base of the south face – which in the southern hemisphere is the same as a North Face in the Alps – where we stopped to sleep. After a very cold night – inside the tent, our watch showed -23°C – we reached the summit by what is considered the normal route up this mountain. The climbing, although technically easy, was threatened by avalanches in the whole of the first part.

Then what happened, how did you decide the second climb?
Before I was due to return to Italy the weather forecasts showed the arrival of a long week of good weather on exactly my departure date, which I could not move. So I decided to make the approach to the mountain with bad weather and try the climb in any case, hoping to get the day of mixed weather that normally proceeds the arrival of the sun. I didn’t want to give up without having tried and once I’d found the companions –Martin again and and Pedrito el “fino”-we turned our attention to the summits to the left of the Cordon Marconi, called Colmillos, which means “canine teeth” and had never been climbed.

Tell us about these ascents...
I knew well the long approach to these mountains because they are opposite the west face of Cerro Piergiorgio, which I climbed with Cristian Brenna in 2008. The main worry after many days of bad weather was the abundant snow and the risk of finding the summits in bad conditions. And this was the case. Luckily for us the technical difficulties were not great and after a long approach day and a less-cold night than the one on Cerro Pollone, having left the skis at the foot of the Colmillos, we climbed two of the three virgin summits.

Three first ascents... how do they compare? The most difficult, the best, the one you remember the most and why?
Both the climbs were good and even if they were not technically very difficult, tackling them in winter means avalanche risk, intense cold, short days and long approaches made more tiring by the snow. In addition on the Colmillos, since it was a first ascent, we had those moments of uncertainty where you proceed step after step looking for the best line with only a vague idea of the difficulties and problems you’ll meet. There is no description of the route, you’re the first – that doesn’t automatically mean the best – climber and are very lucky, considering that nowadays the scope for first ascents near to El Chalten has considerably reduced.

Patagonia and its mountains are not new for you, this was your fifth visit. You climbed a new route on the NW face of Cerro Piergiorgio (2008). How did you find Patagonia this time, have you or it changed the most?!
The mountains are the same but it really seems that the climate is changing and there are more fine days which is good news for climbers. This change is confirmed by the statistics. However I think it’s the better weather forecasts that have enabled climbing in Patagonia to experience a step-change in quality, as measured by the number of ascents, the high technical difficulty, and by the style and time of the ascents of the classic routes. Knowing when and for how long you will have good weather lets you go lightweight without fixed ropes, halving the climbing time. It means choosing objectives for when the sun will be shining and on bad weather days relaxing in the town in the warm and dry. At least for the time being, the long sieges up on the mountain are a thing of the past. We should remember though that while technology has meant some advances, it has removed something as well. For climbers, the adventurousness and fascination of these mountains came not just from their spectacular granite tower forms but also from the fact that it was impossible to easily reach your objective due to the bad weather and the lack of good weather forecasts. Today the “impossible” is smaller, as is the element of adventure.

How was the “spirit” of the Patagonia climbing community?
If we are talking about Cerro Torre and the past events, such as the chopping of t he bolts on the via Maestri, the atmosphere at El Chalten is not brilliant. The town and its people are still waiting for an apology from the international climbing community who praised this act. They are annoyed, angry and disappointed. The considerations of the Club Andino and local climbers could open up an interesting debate which would make many people change their ideas. Personally, I think this would be a great opportunity for the entire climbing community.

In today’s "global world" it seems that the mountains as well are all a bit the same and equally accessible, and that there are no long great achievements. What do you think, reflecting on what you may do in the immediate future?
Today’s great climbs are often re-evaluations of great climbs from the past and maybe for this reason the idea of what is “impossible” is much reduced. It’s hard today to hear that a face, crest or mountain is impossible, but I am equally convinced that the mountains can be the theatre for great achievements and dreams. Sometimes it’s simple: you just remove some technology, choose winter instead of summer, go alone, not follow today’s fashion and “numbers”. My future climbing? I hope to surprise myself, enjoy myself and share the ideas which were at the start of climbing and which today we have forgotten. The mountain as the place where you challenge yourself rather than measure yourself against or compete with another climber.