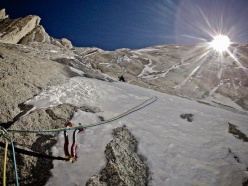 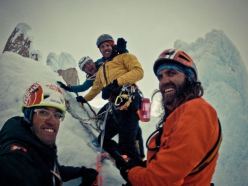 Hansjörg Auer, Thomas Huber, Much Mayr, Mario Walder on the summit of Cerro Standhardt. The weather was still good, but things were about to change...
Photo by Hansjörg Auer 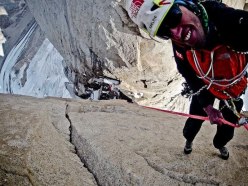 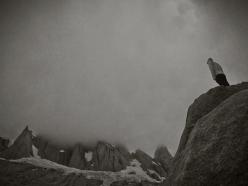 The thoughts about alpinism in Patagonia by Hansjörg Auer who this season, apart from establishing a new route up Aguja Guillaumet with Mario Walder, suddenly had to battle hard against the infamous Patagonian storms.

We've said it on numerous occasions, this is a record season for alpinism in Patagonia. There are many factors which have led to this such as the marked increase in the number of climbers who travel to the end of the world, and of course the climate which has resulted in a series of unbelievable weather windows. But not all that glitters is gold, the successes we get to hear and report about are of course only a small part of goes on in the mountains. Patagonia is and always will be Patagonia, marked sharp, sudden changes in the weather. Someone who knows this all too well is Austrian alpinist Hansjörg Auer who this season was surprised by one of those violent storms that have made this land, and these mountains, famous. And only thanks to their great collective experience did he, Thomas Huber, Much Mayr and Mario Walder succeed in getting off the mountain unharmed. "We reached the glacier after hours of tiring abseils" Auer told Planetmountain "dodging dangerous rock falls, gale force winds and huge waterfalls, all examples of how the 'new' Patagonia can quickly transform into the 'old' Patagonia. We were lucky." Note that we're dealing with an extremely strong team of alpinists with a wealth of experience and a climbing resume that most would envy.
It has to be said that in some ways this increased influx of climbers to Patagonia is a normal process, part of how things develop and not necessarily something negative, on the contrary. But what Hansjörg saw and heard this year got him particularly worried... his is an important testimony, worth listening to and thinking about.

Mountaineering is a dynamic entity. Always exposed to a steady development, and that's a good thing. Basically, I don't really care about which direction this sport develops, as long as climbers adhere to certain basic rules.

Having said that, I see the current development in Patagonia in a very critical light. Climbing in Patagonia seems to moving more and more away from what were formerly feared and revered mountains towards Chamonix-like customs.

I certainly don't want to preach to anyone or provide a false impression when it comes down to deciding about how much one is willing to risk. And I am also aware that I'm probably the wrong person to talk about risk. I've simply been too happy to move across this scorching dance floor, and after all my free solo climbs I'm sure people will believe me.

I've now been to Patagonia five times. Once in the Chochamo valley and once at the Torres del Paine. Apart from Chochamo valley and my latest new route on Guillaumet, I've never climbed without encountering a storm, snow or rain. Either I've always chosen the wrong moment, or they simply still exist. Those treacherous weather conditions where within just a few minutes you switch from climbing pleasantly in a T-shirt to battling hard wearing a full-blown Gore-tex shell. Where in just a few minutes a pitch transforms from easy grade V climbing into the impossible.

Unfortunately this season I experienced all of this once again. During our attempt at the Cerro Torre Traverse we were caught out by a sudden storm, not forecast by the weathermen. We were at the bivouac on Cerro Standhardt and the situation was extremely bad. Only thanks to our years of experience and with a lot of luck did our team (Thomas Huber, Much Mayr, Mario Walder) we survive the descent down the East Face unharmed.

And then when you return to El Chalten for a steak and beer and overhear the plans of other climbers, then it makes you feel sick. Without any particular experience they discuss running up the the "pleasant" Via dei Ragni route on the West Face of Cerro Torre. This route isn't extremely difficult, but it is nevertheless located in one of the remotest corners and this surely is worth bearing in mind. Or they talk about other "not too bad" routes that, were they in the Dolomites, would be regarded as extreme classics. And then there are comments like "anyway, they'll be loads of other climbers on the route". It's clear that things change and one might believe therefore that there is a reduced risk, but Patagonia gives nothing away for free, adequate climbing technique, endurance and experience are all necessary pre-requisites. Sure, in good weather conditions and without gale-force winds all will turn out for the best. But what happens when suddenly and quite unexpectedly the infamous Patagonian weather takes hold There is no helicopter rescue, other climbers coming to the rescue is limited and the paths that lead to El Chalten are very, very long.

People see the dotted red lines in the guidebook and interpret them in much the same ways as those in the guidebooks for Finale or Arco. I don't want to belittle the work of Rolando Garibotti or Dörte Pietron in any way, but through the guidebook routes are served on a platter far too easily to the inexperienced. And I also think that much has been taken away from the Patagonian feeling. All the groundwork and finding out about a particular route is no longer necessary, but it is exactly this homework which might avoid potential mistakes and accidents. Getting to grips with a particular subject matter results in increased safety.

It's like this that people find themselves on the summit of Fitz Roy, after having climbed up the Affaniseff route all of a sudden they decide to abseil down the Tehuelche. A route for which you need years of experience simply to free a rope which has become stuck, or even to locate the start of the abseil when approached from above. They don't even know where the "normal descent" lies.

Hence also alpinists who climb the Via dei Ragni and to reach the summit aid climb A0 up the ice screws. Unbelievable! Of course these are just isolated cases. The majority of alpinists who come to Patagonia have years of experience in the mountains and know how to deal with Patagonian terrain. But it's only be illustrating particular examples that one can start to rethink.

With these words I don't want to put anyone in a bad light, portray anyone negatively. My aim though is to demonstrate that in Patagonia the weather still changes dramatically and suddenly, that the West Face of Cerro Torre is one of the remotest peaks, that there is no helicopter rescue in Patagonia and that in just a few minutes continuing upwards or even descending can transform into real hell. I've been through this myself a few times and I wouldn't wish this on anyone.