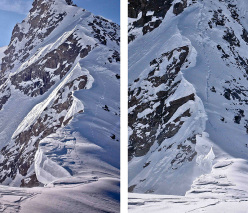 Hansjörg Auer and the cornice collapse

Austrian alpinist Hansjörg Auer talks about the snow cornice that collapsed beneath his feet during a recent climb in the Ötztaler Alps.

"Somehow I managed to jump to the right side yesterday high up in my home mountains when this huge cornice collapsed under my feet." With this sentence, posted a few days ago on Facebook, Hansjörg Auer wanted to share his latest experience in the mountains when, almost miraculously, he survived a gigantic cornice collapse while descending from the summit of Hohe Geige in the Ötztaler Alps. The Austrian mountain guide and one of the world's leading mountaineers accompanied the post with a photo which, naturally, whizzed across the web. As he himself explained, Auer decided to share the picture "to underline that even with many years of experience you're never immune to this incalculable monsters." We - just to remind everyone once again that, even these things, represent the very essence of the mountains and alpinism - asked Auer to tell us more about the experience. That, luckily, finished in the best possible way.

HANSJÖRG AUER AND THE COLLAPSED CORNICE

"My brother, my friend Mathias and I climbed the NE Ridge of Hohe Geige (3395m) in the Ötztaler Alps. It's an area we all know like the back of our hands. The three of us have circa 50 years of climbing experience between us and we're all qualified mountain guides.

Like every year a cornice formed shortly before the summit, and of course we'd noticed it. Due to the cold and stormy northwesterly wind we quickly climbed the final metres to the summit. Mathias broke trail, my brother followed. I lagged slightly behind since I'd stopped to take a photo. The trail we broke was far further from the cornice than usual and I remember thinking that my colleagues were being overly cautious. But hey, this couldn't hurt.

The descent follows the line of ascent, down the same trail. Once again I was the last. We down climbed close to each other. As I quickly jumped over the last rock my friends were already ascending up the other side of the ridge.

Suddenly I felt something tremble and heard a loud, cracking hiss. I looked at the snow cover and saw a circa 10cm crack between my feet. I immediately knew what was happening and instinctively leaped to the side. My friends turned around and searched for me: there I lay on the ground. I got up and simply couldn't believe my eyes when I saw what had just happened.

The cornice collapse triggered a huge avalanche that came to rest on the upper glacier basin. I took a couple of photos and then with my brother and Mathias we descended and immediately began searching for avalanche beacon signals as we didn't know if anyone was down there. We'd been climbing on the weekend and it was perfect winter weather. But we were lucky. We were the only ones on the mountain.

Even though I've always been aware of this danger, last year I experienced another cornice collapse and, then too, I managed to jump away just in time. Obviously being aware of this risk doesn't suffice, you need to take certain safety measures. And there are some things that shouldn't be forgotten:

- the bigger the cornice, the greater the tension on the ridge
- the higher the cornice, the more this leans out, i.e. the safe rocky ridge is located further back, since the angle of the slope below usually remains constant.
- cornices usually do not collapse vertically. Often a section of the snow cover breaks off during the collapse.
- two rocks visible along a ridge are not necessarily connected in a direct line
- large cornices often result in deep cracks since the these break off from the ridge (above all in the Karakorum, Himalaya, ...)

I don't think we made a huge mistake. It was just the result of a series of unlucky factors."