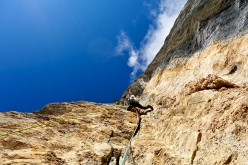 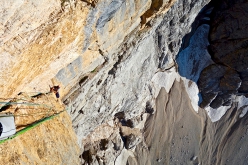 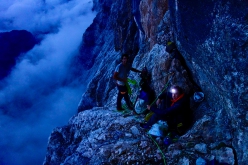 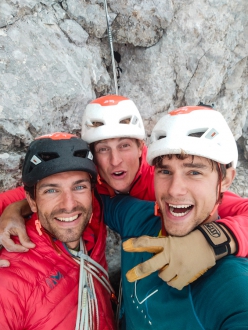 Symon Welfringer reports about his repeat, with fellow French alpinists Antonin Cechini and Aurélien Vaissière, of Colonne d’Ercole up the NW Face of Civetta in the Dolomites. The 1200m route up Punta Tissi was first ascended by Alessandro Baù, Alessandro Beber and Nicola Tondini with difficulties up to IX and it is believed that this is the first onsight ascent.

During a brief visit to the Dolomites French climbers Symon Welfringer, Antonin Cechini and Aurélien Vaissière repeated Colonne d'Ercole on the NW Face of Civetta in the Dolomites. Established between 2009 and 2012 by Alessandro Baù, Alessandro Beber and Nicola Tondini with difficulties up to IX, this 1200-meter route to the top of Punta Tissi was repeated in 2014 by Alex Walpoth and Martin Dejori, who had to abandon the dream of climbing it onsight when holds broke. The French ascent is likely to be the first on-sight therefore.

From the 16th to 18th of August Antonin Cechini, Aurélien Vaissière and I repeated the masterpiece Colonne d’Ercole, an awesome multipitch climb that leads to the summit of Punta Tissi on Civetta in the Dolomites.

This big wall extends for circa 1200m up the face and in order to climb it we made two bivouacs. This proved an awesome strategy as the bivys at the 10th and 23rd belays were really comfortable, and also because it gave us the time we needed to send the route properly. What was so amazing is that I managed to onsight all the 29 pitches, leading all the most difficult.

Having climbed the route, I’d say that many pitches offer excellent rock quality but as is usual on traditional routes on limestone, there are some long runouts above pitons. The crux 7c pitch in particular is a stern psychological test, as you have to do a hard boulder move high above some dubious pegs.

In a nutshell, this route provided us with all we’d searched for when we drove across from France to the Dolomites. Huge commitment on every pitch, that requires constant, full focus. We didn't find some belays as some pegs had probably disappeared, and some some belays weren't safe enough to haul the bags. All this made for some spicy climbing to reach the top of this awesome Civetta route.