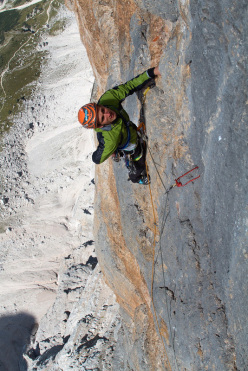 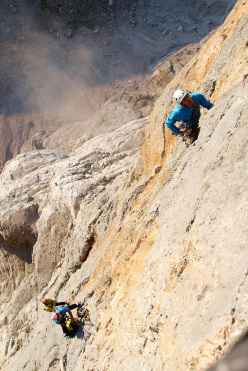 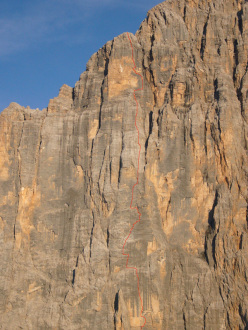 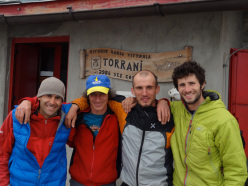 We'd mentioned it in September 2012. 29 pitches, only pegs and difficulties up to grade IX... This, in a nutshell, is Colonne d'Ercole, the great new route established between the summers of 2009 and 2012 (and freed in a single push on 7 and 8 September 2012) by Alexander Baù, Alessandro Beber and Nicola Tondini up Punta Tissi in the heart of Civetta's massive North West Face. A line which, according to those who made the first ascent - and we don't find this hard to believe - is destined to become a reference point for other climbs in the Dolomites. So, in the hope of putting this rainy spring well and truly behind us, now seemed just the right moment to find out more about this line together with Alessandro Baù in the conviction that "Pillars of Hercules" will become a future project (read: summer) for numerous climbers / alpinists.

Colonne d'Ercole, Pillars of Hercules... an evocative name. Which pillars did you have to cross to climb this route?

Ale Beber "gave birth" to the name and all three of us liked it right away. It suits the line perfectly, both due to morphology of the face itself and the experience we had up there. Punta Tissi finishes with this massive yellow column and we dabbled into mythology because we gave it everything we had during the first ascent, we really did come close to our limits, especially from a mental point of view. The route is dedicated to Ventura, Valter and Renato, (Editor's note Venturino De Bona, Valter Bellenzier and Renato De Zordo), the legendary hut wardens at Rifugio Torrani, Rifugio Tissi and Rifugio Coldai, for all the friendship and support they have shown us. If the North West Face is such a wonderful place to be, it's also thanks to them.

Punta Tissi, North West Face of Civetta. One might believe that everything has already been done. But instead...
Instead there was a crazy line that took our breath away, one of the reference routes in the Dolomites. Up in Civetta it's not like on Marmolada or Tre Cime where if you're not careful you easily stray onto another route. Far fewer climbers come here and consequently there are fewer routes; during the last 22 years only 5 new routes have been put up here! And one of these is Chimera Vertical.

How did the idea come about for this new route? Whose idea was it? And how did this trio form?
I met Nic in 2008 after repeating some his routes, we discussed doing something new together on Civetta and we had two possible lines in mind. We walked up to the hut and during the night it poured with rain and so then next morning, while waiting for the face to dry, we carefully studied the lines through our binoculars. When we got close to the "slaughterhouse" (the scree slope which lies in the fall-line from the summit) we immediately made up our minds: rocks continually fell from the face, it was frightening, so we opted for the line which was less exposed. Having said that, traversing across the pedestal, unroped, while stones kept shooting past us was something we won't be forgetting in a hurry. After this first reccie, during which we climbed the pedestal and the first five pitches, I called Ale (Beber). He, too, knows this mountain well and he'd noted the line; we immediately invited him to join us on this adventure! Things are much more fun in a team of three... And so the idea took shape, in different ways, in all three of us!

No bolts, normal pegs and trad gear. Why? It's not as if you've given up on bolts altogether? And out of interest, did you have them with you in your rucksack ;-) ?
This is the style we like best, the one that best suits the face. We were courageous enough to give it a go, we climbed well and were lucky. In truth, on our second go (during which we established a further 5 pitches, from 9 to 13, VII-, VII+, II, IX-, IX-) we took bolts and a drill since the central slabs seemed absolutely impossible from below; but when we reached the first ledge and saw up close what lay in store we knew that it would prove difficult but also that... we could give it a go! And so the bolts remained firmly in the bottom of our rucksack. After which, even on the hardest pitches, we only took a hammer, pegs and a great desire to climb!

A route that "lasted" three years... Some might argue this is a really long time to establish a new route. How would you reply? And what is the beautiful aspect - if there is one - of climbing a new route which keeps your mind occupied for such a long time? In short, did you ever think of giving up?
Abandoning our attempt?! Never! It's true, it took a long time, but it wasn't easy to find a date which suited all three of us: Nic and Ale are mountain guides and were free during the week while I'm an engineer and only had weekends off. And if you bear in mind the weather, the complex logistics and the condition of the face... everything becomes even more complicated! It would be great to establish a route of this calibre in a single push, but one would have to change the style of first ascent. We left all pegs in-situ, you can't do this if you climb in a single-push over a period of a couple of days. This also makes a considerable difference to those who want to repeat the route in the future... The great thing about climbing a new route in a team of three is that you're always completely motivated, both during the ascent and when you train physically and mentally for the climb. The hardest thing was waiting for winter to come to an end because we really yearned to get back and finish our project, you just can't imagine our drive! And, last but not least, during these years we formed a beautiful friendship!

You used three terms to describe Colonne d'Ercole: beautiful, difficult and established according to rigorous first ascent ethics. Can you tell us more about each of these?
Beautiful: because the rock is incredible. Of the 28 pitches only three, four have delicate rock, while all the others offer the best Marmoladaesque limestone! The line itself is incredibly logical and independent: on the first third the route follows a series of cracks and overhanging corners, the central section is then marked by jaw-dropping grey slabs, while the last third leads past a series of highly weathered pillars and slabs.
Difficult: the maximum difficulty isn't prohibitive, we reckon somewhere in the region of UIAA grade nine. No, what renders this route and important test is the fact that these physical difficulties never let up and need to be combined with the mental commitment. The sequence of pitches in the middle section might be IX-, IX-, VIII/VIII+, IX,IX-, VIII+/IX-, followed by numerous VIII and VII which really take it out of you.
Ethics: during the first ascent we only used cliff hooks when hammering in our pegs, and we never used aid... we didn't even have aiders with us! Apart from when we took the drill (which always remained in the bottom of the sack) we only climbed with a full rack of trad gear, pegs and a hammer.

How did you organise yourself as a team and who did what during the ascent?
The team was perfect: we'd agreed to forge one pitch each so that we'd always be fresh. On the central slabs Nic and I alternated most of the leads but Ale Beber pulled the rabbit out of the hat by finding a way past an incredible section of single and two-finger pockets. Quite simply fantastic!

What was the most beautiful thing, and also the least beautiful thing, about this adventure?
The icing on the cake was certainly those the two days spent making the first free ascent: it was early September and the sky was so incredibly clear, something which happens very rarely indeed. Have a look at the video and see for yourself! The least beautiful aspect? The fact that it's all over. It'll be hard to find another route of similar calibre. But obviously we're going to try!

You know the NW Face of Civetta extremely well. Without a doubt a legendary rock face in the Dolomites... What's it like to make the first ascent of a new route there? Weren't you worried that someone might say that there was "no room" for another route between Via Martini, Kein Rest von Sehnsucht and the Philip Flamm corner?
Concluding Columns D'Ercole was magnificent after having already established Chimera Vertical: two logical lines up unexplored sections of the face. When I look at the North West Face from Laste and think about all the lovely adventures it seems like a dream!
"No room?" Do as I did, repeat all 4 routes and you'll come to the same conclusion...

What would you say and recommend to those who want to repeat Colonne d'Ercole?
It's worth doing, and certainly worth the travel even for those who live a long way away... it's a magnificent route! It can be climbed in two or three days; either bivy - not particularly comfortably - at the end of pitch fifteen or take it more leisurely and bivy on the enormous ledges on pitch 10 and 22 (or 23).

And what would you say to those who haven't climbed on the North West Face before?
That it's absolutely worth it, because it's only when you're up, wedged between the folds of the face that you comprehend its grandeur. Many teams choose Via Aste as their first route, a legendary line and by no means easy. Few however know that the Polish route is a great alternative, just as beautiful but far less popular.

What remains to be done now? Perhaps another route on Civetta...
There are always plenty of things to do, all you need is enough time and the desire to get out and do them... this holds true for Civetta, too! But after all these adventures in the shadow NW Face we now want to try something different and test ourselves on different mountains.