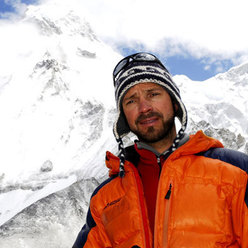 Dedicated to his friend Karl Unterkircher, by Ivo Rabanser his companion on climbs and dreams in the Dolomites.

The death of Karl Unterkircher has left us dumbfound, dismayed. We have often written in these occasions that words fail to measure the loss. Mountaineers know this well, they know these moments... for them and of them all that remains is the memory of having shared a passion and the certainty of a hope: this is and was what they lived for.

While we publish this memory of Karl, his climbing partners Walter Nones and Simon Kehrer are still on the mountain and involved in their descent..Their fight for survival on Nanga Parbat is hard and complicated and we are all following this battle with baited breath. Keep it together boys!


Dedicated to Karl
by Ivo Rabanser

I met Karl more than twenty years ago on the pistes in Val Gardena. I was immediately struck by his skiing, safe and equally aggressive. He was regal on the snow. He skied heedless of all obstacles, light and like a dart. We became friends with that spontaneity which ties seventeen year olds. We often met in the bars in Selva, since at that age one doesn't live for the mountains only. I remember one evening, it was late, he wanted to drive me home. We talked for hours about the dreams we wanted to realise. Karl had begun mountaineering a short while ago and he was electrified by the world which was unfolding before him. In a calm and ever smiling manner. He had found his dimension and now he would never let it go. For nothing in the world.

We climbed numerous routes together on the Sella. It was our “Sturm und Drang” period during which we tested our capabilities, while we gradually became aware of what suited us most. The great thing about the mountains is that everyone can find his or her secret garden, cultivate it with passion and watch it grow. After the military service Karl began to train methodically. He was attracted by the big mountain faces and he wanted to be prepared for them. He was modest - an authentic modesty so rare between men - and he had a naive approach to the mountains and to life in general. From the Dolomites he moved on to the Western Alps without inhibitions. Rock, ice, mixed, snow... he dominated on all types of terrain. As one ascent followed the other, his experience increased. He became stronger, more decisive, resolute.

He lived his passion for the mountain in an impelling manner, without compromises. He went straight after his objectives. In the Dolomites he made a series of first ascent without ever drilling the rock. But his true aspirations were always towards the higher altitudes. As a Mountain Guide he was able to spend much of his time in the environment which suited him most and were he could find his true stature.

In 2004 an epic double climb consecrated him once and for all into the Olympus of great mountaineers: he climbed Everest and K2 without oxygen and in a single season. I remember that before heading off for K2 he came to my house and talked to me about his experience on the roof of the world with his usual simplicity, as if it had been any old ascent. I gave him a book about the history of the Himalayan giant he was about to climb.

Last year he outclasses this prestigious record with an undertaking on the much-feared North Face of Gasherbrum II. When he returned home to Val Gardena he couldn't wait to finally put hands on the Dolomia rock. And we often met on the peaks in the Dolomites, both working as guides and following are personal mirages. At times we remembered times past, or we planned some ascents together. A mighty arête on Sassopiatto had grabbed our attention and on his return we had planned to take a closer look...

That night in the car, many years ago, Karl confided that he wanted to get to know the Himalayas and climb the highest mountains in the world. I think he was capable of realising many of his dreams. And this is a rare privilege reserved to but a few.