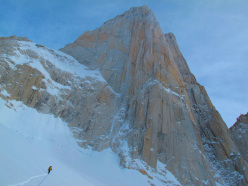 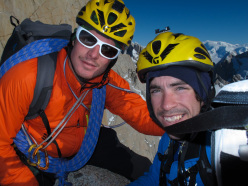 Shortly before Stephan Siegrist, Thomas Senf and Ralf Weber made their winter ascent of Cerro Stanhardt in Patagonia, their compatriot Lerjen-Demjen and young Argentine alpinist Jorge Ackermann could be found just a few miles to the north on Fitz Roy enduring harsh conditions during their attempt to establish a new route in winter up Fitz Roy.

Arriving at El Chalten on 14 June, the two climbers their sights set on a line they had initially attempted  last summer to the let of the Ferrari route and which, after 8 pitches, they had been forced to abandon. Motivated by the added challenge of climbing in winter and completely alone, 26-year-old Lerjen-Demjen and 25-year old Ackermann hauled 30kg of gear past Passo Superior to the base of the face, then ascended mixed terrain to reach the overhanging main face. After 14 hours of climbing they turned in for the night in their portaledge. The next day resulted in a mere 3 pitches, climbed using difficult aid in 10 hours, while the next 14-hour day yielded a further 3 pitches to reach the "Ledge of hope". As the name implies this should have led to easier terrain but, acting on Rolando Garibotti's warning about an incoming Patagonian storm and after having climbed 10 pitches of A3, M4-5, the two decided to not to push their luck and retreated.

Lerjen-Demjen commented "We abseiled down the entire line using nuts, reached the Bergschrund much relieved, the weather was still OK and we were sure we'd reach Passo Superior! We both smiled as we glanced back for the last time. We'd never quarrelled, it had been fantastic, on this face, alone, in winter, we'd given it all we had, enjoyed being tested to the very limit by nature. This was my best experience in the mountain yet and what I'd been searching for, this silence, the one which other mountaineers had experienced 70 years before us! I was happy and so was Jorge, we were a team which despite the failed summit was overcome by a feeling of satisfaction which no other summit had given me. We could have climbed many other normal routes during this time but we'd opted for an adventure, and it was certainly worth it!"

For the record the two, who shortly afterwards made a swift 3 hour ascent of Aguja Guillaumet, plan to return to Patagonia this November.