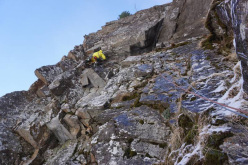 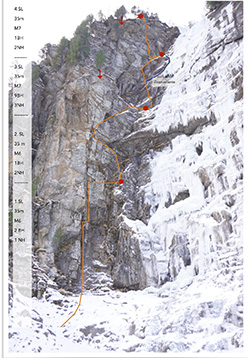 Inspired by a recent climbing trip to Canada and the general lack of ice closer to home, over a three day period at the start of January the Austrian mountain guides Vittorio Messini and Matthias Wurzer made the first ascent of El Nino, a 120m route they describe as a mega mixed line.

Breaching difficulties up to M7, the four pitch outing is located immediately to the left of the ultra classic icefall Rechter Nordportal Eisfall WI5-, 120m, close to the northern entrance of the Felbertauern tunnel on the flanks of Mt .Hochgasser.

"Apart from pitch three, that leads straight through a tricky slab, all other pitches need protecting up beautiful gneiss cracks past superb hooks. When you finally breach pitch 4, you can hardly believe that winter climbing can be so much fun!” explained Messini, adding “it’s easy to guess why we named the route El Nino, and in line with the recent weather, this route is a beautiful, dry and hot outing."