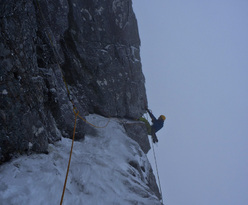 Don't die of Ignorance, first repeat on Ben Nevis by Boswell and Dunn

On 29/01/2012 Greg Boswell and James Dunn made the coveted second ascent of Don't die of Ignorance, XI,11, Ben Nevis, Scotland.

One of Scotland's most fearsome winter climbs, Don't Die of Ignorance high up on The Comb on Ben Nevis, has finally been repeated by Greg Boswell and James Dunn. The route takes a line which had first been climbed in 1987 by Simon Yates and Andy Cave at VI,6 / A2 and was freed in 2008 by Dave MacLeod at XI,11.

Boswell failed on Friday's on-sight attempt when he dropped a tool half-way through the crux, and a second attempt was foiled when a flake ripped. Not to be beaten, he was lucky on this third attempt and things went smoothly on Sunday's ascent. Commenting on scottishwinter.com, he stated "the crux traverse was powerful and thin, but the icy wall above the crack was utterly terrifying with a good 10m run out above a dodgy hook. Some of the thinnest climbing I have ever done. A sterling effort for Mr MacLeod to free such an awesome line!"

Just a few days ago Boswell made headline news when he teamed up with Will Sim to make the second ascent of The Gathering (VIII,9) on Coire an Lochain. First ascended by Guy Robertson and Pete Macpherson in February 2011, Boswell's 13 January repeat is featured in the short video below. Next stop Anubis, MacLeod's 2010 creation and possibly the hardest winter climb in Scotland?