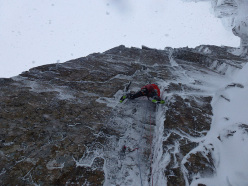 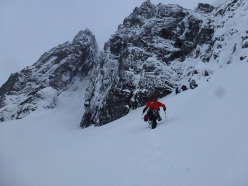 Difficult winter climb in Scotland by Isaksson and Zgraggen

On February 28 Olov Isaksson from Sweden and Karin Zgraggen from Switzerland made the first ascent of Eggäschpili (IX,9) on Stob Coire nan Lochan in Glen Coe, Scotland.

It's not an every day occurrence that new winter routes are established in Scotland by visiting foreign climbers, and so the difficult line climbed at in Stob Coire nan Lochan by Sweden's Olov Isaksson and Switzerland's Karin Zgraggen is all the more impressive.

The duo travelled to Scotland after Isaksson had savoured the Highland's delights for the first time during the 2014 BMC Winter Meet. They set the ball rolling on the February 27th by ascending Magic Crack at Coire an t-Sneachda and the next day they headed straight to Stob Coire nan Lochan to try a line Isaksson had noticed during the meeting: a striking corner opposite Slenderhead.

Isaksson and Zgraggen climbed 3 pitches, the first offering technically sustained moves with difficult protection, to reach the top of a large slanting ledge. From here easy terrain leads to the top of the mountain but Zgraggen began to show signs of hypothermia and they wisely opted to descend. The route has been named Eggäschpili and graded (IX,9) but since this is only Isaksson's sixth winter route in Scotland (and Zgraggen's first), they underline that his is only a tentative suggestion.