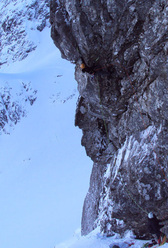 Dave MacLeod has carried out the first winter ascent of Anubis, at E8 6c one of the hardest summer routes on Ben Nevis which was, unsurprisingly, first ascended in 2005 by Macleod himself.

MacLeod stated that his latest 220m climb had been his long term ambition and success came about after some extremely bold climbing resulted in total commitment on the upper crux. After having taken a fall on the lower wall before the crux roof - which relaxed him and helped him climb nearer his limit without so much caution - MacLeod then spent several hours negotiating the terrain ahead.

He recounts "Several hours later, with nothing left in my arms, my feet slipped off again on the final headwall, well out from the last gear. I had the eyeball bulge of a leader with three seconds to find a solution or fall. A footless speed-downclimb of about 8 moves and kung foo kick back onto the footledge under the roof saved one more chance to get to the belay. Christina burst out laughing at the sight of it. I laughed as well, after a minute or two."

The entire, aptly named climb took Macleod two previous attempts on separate days and he obviously had knowledge of the route from his summer ascent. Although a precise grade has not yet been put forward, it is clear in his mind that this is a significant step forwards both in terms of technical difficulty and psychological commitment.

Two of MacLeod's other winter climbs, Don't Die of Ignorance (2009) on Ben Nevis and The Hurting (2005) at Coire an t-Sneachda were widely regarded as being the non-plus ultra in Scottish winter climbing. Until now.