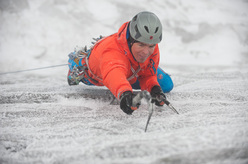 Dani Arnold repeating The Hurting XI 11 at Coire an t-Sneachda in Scotland.
Photo by Thomas Senf

Swiss alpinist Dani Arnold has repeated The Hurting XI 11 at Coire an t-Sneachda in Scotland.

When in April 2011 Dani Arnold beat all speed records up the North Face of the Eiger by climbing the Heckmair route in a mere 2 hours and 38 minutes, the Swissman alerted everyone about his abilities. Also because he had already amply proven his worth a year previously with the first winter ascent of Torre Egger in Patagonia together with Stephan Siegrist and Thomas Senf. Now further confirmation about his talent and determination comes from Scotland, where he has just carried out a rare repeat of The Hurting XI 11, the route established by Dave MacLeod in 2005 at Coire an t-Sneachda and at the time considered the hardest mixed trad climb in the world,

Arnold attempted MacLeod's route on-sight but fell from the final moves. "The lower section is difficult to protect and I managed to place the first gear at about 10m" explained the Mountain Guide "this was followed by the crux section, with tiny hooks hidden beneath the snow. On the upper section I searched around for a long time trying to figure it out, then I tried with a poor hook... which didn't hold." Two days later Arnold returned and climbed the line without falls. "This route means a lot to me" said Arnold "It's the hardest I've ever climbed up to now but there are certainly even harder routes out there. On routes like this the style plays an important role. And since I haven't got the same experience at placing trad gear as the local climbers I'm really proud of my ascent." Quite rightly so: the route remained unrepeated for almost 6 years until the second and third ascent by Andy Turner and Greg Boswell at the start of 2011.