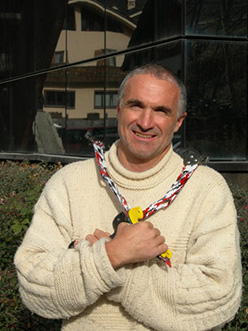 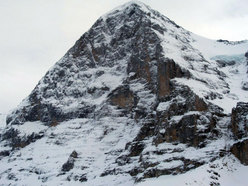 The North Face of the Eiger
Photo by arch. C. Profit 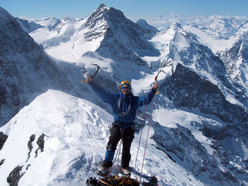 On the summit of the Eiger
Photo by arch. C. Profit

On 09/04/07 Christophe Profit, one of the most important mountaineers of all times, climbed the North Face of the Eiger for the tenth time with a client.

Ten times up the North Face of the Eiger as a mountain guide with a client. In times like these in which everything seems "normal" (not only in mountaineering), including the ascent of the legendary north face could seem to be a non-news item. But give the mountain guide a name and you'll immediately understand that there's much that can be said. Yes, because we're talking about Christophe Profit. The same Profit who as protagonist and inventor carried out ascents hitherto unheard of, both for their speed and their conception, during the 1980's up all the "problems" of the Alps.

Profit's climbs were supersonic, solo, multiple. They contained the mountaineering's maximum difficulties - in short, this was the birth of speed ascents and enchainments. And naturally the North Face of the Eiger was the "playground" par excellance for Profit's raids. In 1985 it was he who carried out the first solo ascent in winter and in a day (in just 10 hours) of this North Face in the Bernese Oberland.

1985 was also the year in which he enchained the trilogy of North Faces: Eiger, Matterhorn and Grandes Jorasses (up the Linceul), naturally in just 24 hours. He repeated this feat in March 1987 with a tour du force up the Croz Spur on the Grandes Jorasses, the Heckmair route on the Eiger North Face and the Schmid route on the Matterhorn solo in winter in a record 42 hours...

We could go on and mention the incredible and elegant solo dance (without ropes) up the Direct American on the SW Face of the Petit Dru, climbed in just 3 hours and 10 minutes in 1982. Or recount the integral solo ascent of the Peuterey crest. And talk about his Himalayan work of art in 1991 when, together with Pierre BÃ©ghin, he traced a new line along the NW crest of K2.

We could talk for ages about the great ascents of this fantastic mountaineer. But the real news is that last Monday the 47 year old French Mountain Guide Christophe Profit accompanied a client, in this particular case Mr. Valery Guillebon, for the tenth time to the summit of the Eiger via the N. Face. This is the news! Because it would be wrong to think that ascents like this one are in no way related to great mountaineering, which is measured in all seasons of life and goes well beyond speed ascents.