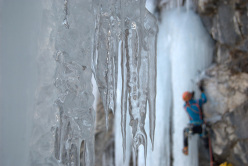 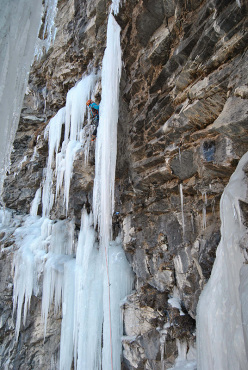 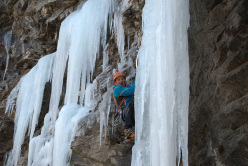 On 15/12/2015 The mountain guides Ezio Marlier and Thomas Scalise Meynet, together with Roger Bovard made the first ascent of Chloë (M6 WI 4 II), a new, beautiful and difficult ice climb in vallone del Grauson (Cogne, Valle d’Aosta, Italy.. Meynet reports about the ascent, tells the story of Chloë and more.

This is the complex and dense set of messages that resulted in a New and Superb route in vallone del Grauson (Cogne). Chloë (M6 WI 4 II) is the route named after my daughter and the link, invisible and Indivisible, of my life with hers.

We met at 7:00 at the bar La Parisette at Sarre and, after a big breakfast, we set off towards Cogne. The knew the road well we know it well and after joking around, laughing and talking about future projects, we slung our rucksacks over our shoulders. After an hour's walk we reached the base of Oceano Polare.

The line on the left we’d dreamt of had formed and I started to drool. While Roger and Ezio geared up, I climbed the first pitch on my own and hid at the base of the drip in search of the best position to take photographs.

Roger easily climbed the first pitch and then belayed next to me.

Now it was time for Uncle Ezio (Ezio Marlier ed) and his Vision.

He set off as if he were about to climb an M13 but with the elegance and precision of a ballet dancer. His climbing was beautiful to watch, his precision at placing protection surgical. He immediately understood what the section had in in and, after just 10 minutes, he reached the top of the drip. Amazing!

While I took the photos I thought to myself “I'm taking pictures and am climbing with someone who’s part of international ice climbing history, and just look, there’s still no stopping him!” The rest of the pitch followed ice: not even a bazooka could have shot him down.

It was Roger’s turn, he climbed calmly but understood immediately that he’d been preceded by a master, by someone who when he places a friend and runs it out for the next six metres, doesn’t even blink. Someone who, when he climbs, gives 100% and never gives up.

We all end up at the belay and I looked at Ezio. His eyes mirror his soul, and today they reflected happiness.

I believe that a good deal of ice climbers have climbed, at least once in their life, either in Cogne or in Valle d'Aosta, on these magnificent ice formations. Well, just remember that a large number of these icefalls you’ve climbed or will climb were first ascended by Ezio Marlier in the ‘90s. Impressive right?

When I started getting interested in ice climbing I was merely twenty years old but, reading up on its history and always pushing myself beyond my limits, I was surprised by these very strong characters. Strong, in their way of taking to to the mountains, strong in character, utterly convinced. Ezio was one of these …

Why do I head to the mountains, to rock or ice climb with Ezio? Well, because besides being a good friend, Ezio is a force of nature, tireless, methodical, precise, aware of what he does, what he has done and what he will do. Outspoken and above all visionary. He manages to see lines and identity faces that many other eyes would not notice.

So this is how Chloë came to life, from a vision, stemming from an intuition and the desire to try those fringes of ice. Maybe someday remembering all this will cheer us up but, in the meantime, Uncle Ezio and I have plenty of other projects to work on. We hope the cold snap will finally come and with it our beloved snow.

Safe climbing to all.