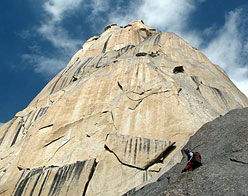 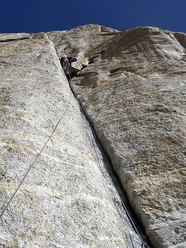 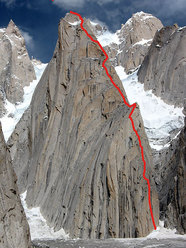 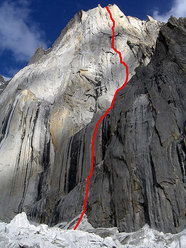 This summer a four-man team comprised of the Belgians Sean Villanueva, Nicolas Favresse, his brother Olivier Favresse and Adam Pustelnik from Poland travelled to Pakistan where they made three impressive big wall first ascents in the Charakusa Valley.

After climbing strong in Patagonia last season, this summer a four-man team comprised of the Belgians Sean Villanueva, Nicolas Favresse, his brother Olivier Favresse and Adam Pustelnik from Poland travelled to Pakistan where they made three impressive big wall first ascents in the Charakusa Valley.

With little or no information at hand and with almost no altitude experience (3 of them had never been above 3500m), the four opted for the Charakusa valley after having heard much, but seen little, about its granite potential. Upon entering the valley they were instantly rewarded with "immense and amazing granite walls", which eventually netted them three long new routes ("Badal" about 5-12+ or 7c all free 1200m on Badal wall, "Ledgeway to Heaven" about 5-12+ or 7c, all free. 1300 m on Nafees Cap and "The Ski Track" about 5.11 or 6c all free 400m on Iqbal wall).

Despite ill luck (Adam was injured early on in the expedition) and being initially hampered by the altitude, they remained focussed on the big walls and concluded "this experience opened our eyes and inspired us to dream about many more projects." Here's their report:


Charakusa Valley, Pakistan 2007
by Nicolas Favresse
The idea to go there emerged when we read about Charakusa’s huge potential for rock climbing. But we really didn’t have much information or many pictures of this place so we were quite anxious thinking we might not find what we were looking for (big walls on steep, high quality granite). But right as we entered the valley many nice walls appeared before us. And the deeper we’d get into it, the more immense and amazing the granite walls seemed to be.

None of us had much experience with such altitude: three of us had never been above 3500m. Here, our base camp was at 4200 m and most of the climbing we did was above 5000m. Acclimatizing felt like we were getting spanked at first. It also didn’t help that we were underestimating the walls to be three times smaller than their actual size. We realized everything is out of proportion so our strategy had to be adapted.

"Badal" circa 5-12+ or 7c all free 1200m on Badal wall
Right in front of our base camp (K7 base camp), a major wall stands. After asking people about it we couldn’t believe no one had climbed such a nice looking wall before. It didn’t seem like a piece of cake so we decided to attempt it with enough food to last 20 days on the wall.

After 16 days (7 of them stuck in snow storm) and about 1300 meters of sustained and steep climbing, all free (except for 5 meters of icy crack which would not be an issue to free in good condition) up to about 5.12+ or 7c, we reached the top of the rock face at an altitude around 6000m. Unfortunately, a forecast of 8 days of bad weather didn’t leave us enough food to wait for good conditions to climb the snow leading to the real summit (probably about 300m more). Anyway, the rock and the free climbing was what we were really there for. But we have to admit that topping out would have been like a little icing on the cake! Back in base camp we quickly refilled our empty reserves with some real cake and whisky!

We called our new route "Badal" which means mix cloudy in Urdu (Pakistani national language) because of the "precision" of the Pakistani weather forecast. So, we’ve given a name to the wall: Badal Wall.

We left 8 pitons and used twelve bolts: 6 were used to hang our portaledges, 5 to reinforce belays in order to haul or rappel, and only one was used in a pitch for free climbing. The route seems safe enough this way.


"Ledgeway to Heaven" circa 5-12+ or 7c, all free. 1300 m on Nafees Cap
Walking deep into the valley we noticed a beautiful needle detached from K7. It was the nicest feature we had seen in the valley for free climbing. The granite is as good as it gets and the aesthetics of the wall is magical, with obvious splitter cracks all over. Almost like a dream come true. After some research we read that some previous expeditions had tried this feature before in big wall style but hadn’t succeeded and had therefore retreated from about half way up the wall down the left. We decided to try to climb up the longest and most obvious line.

Early on during our expedition we made a first attempt but got stuck, exhausted from not being acclimatized. We reached a free climbing dead end about 10 pitches up. But after "Badal" we couldn’t have been acclimatized better and after scoping the wall we decided to try again with a slightly different crack system.

We left our base camp at 1 a.m. in order to reach the base of the route and start climbing with first light (around 4 a.m.). We moved much faster this time and by noon we passed the place we got stuck last time by doing a bouldery section around 5-12+ or 7c.

Adam, unable to climb because of an open cut on his foot, released us from some weight by jugging with a heavier pack. Aside from him none of us jugged. It seemed more important to be slightly slower and enjoy the ascent more by allowing each of us to free climb. A third of the way up Olivier suddenly got really sick and extremely tired. He started puking and had diarrhea. So Sean and Nico began switching leads the whole way.

The quality of each pitch was really exceptional (splitter cracks on perfect granite) and belays on perfect comfortable ledges made it feel like we were cragging the whole way. We climbed all night non-stop with a bright full moon and reached the summit at around 7a.m. with a beautiful clear sunrise on many incredible peaks. It was an amazing present. How perfect?!

The climb reached circa 6000m and is approximately 1300 meters long, with 1000 meter vertical height gain in 28 pitches, 2 of which are long simul pitches (300m and 100m). For the whole route we only left one bolt and one piton. We called our climb "Ledgeway to Heaven" because of all the comfortable ledges we encountered. We named the needle "Nafees Cap" to dedicate our ascent to our brilliant Pakistani guide Nafees.

"The Ski Track" circa 5.11 or 6c all free 400m on Iqbal wall
A few days before the end of our departure Nico, Sean and Juras (Polish climber) climbed a new route on a 400-meter wall called "Iqbal Wall". The line follows an obvious crack up one of the steepest part of the wall. The whole route ranges between 5.10 and 5.11 or 6a/6c with 8 pitches and 200 meters of simul-climbing in order to reach the summit. We called our new route The Ski Track

Early on in our expedition, during our first climb, Olivier and Adam teamed up to attempt a route on the 400-meter Iqbal wall. Halfway up Olivier pull off a fridge-size block, which rolled on his back, then bounced partly on Adam’s foot. Adam was fine but his foot was cut wide open. During the whole expedition the wound never healed completely so Adam wasn’t able to wear his climbing shoes anymore or do any free-climbing. Despite his ugly cut he joined the team on both big walls and strongly contributed to the success of the expedition by helping with the logistical aspects.

All the members of the team are now back home enjoying the luxury of civilization."