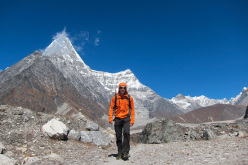 Chad Kellogg in front of Kang Nachugo, Nepal, in 2012.
Photo by David Gottlieb

On 14/02/2014 the 42-year-old American alpinist Chad Kellogg lost his life while descending from Fitz Roy in Patagonia.

The American, and the world's, mountaineering comunity is in mourning at the loss of one of its finest alpinists, Chad Kellogg. The 42-year old had successfully climbed the Afanassieff route on Fitz Roy last Friday together with Jens Holsten when during the descent down the Supercanaleta route the ropes got stuck. In an attempt to free them Kellogg was struck by rockfall. Writing on supertopo.com, Rolando Garibotti stated "He died instantly. It was 9PM. Jens continued the descent alone through the night, reaching the base early in the morning to then continue to El Chalten, the nearest town. Because of the complexities of the location a body recovery will not be attempted. "

Born on 22 September 1971 at Omak, Washington but resident at Seattle, Kellogg was recognised as one of the leading alpinists of his generation. After having established speed records on Mount Rainer and Denali, and after having twice attempted the Everest speed record, his attention turned to climbing difficult new routes on remote and technically challenging mountains. These include, amongst others, the new route up China's Siguniang carried out in 2008 together with Dylan Johnson and, a year later, the new climb up the immense South Face of Aconcagua that terminated on the crest between the two summits after a 42-hour solo push. In January 2013 he climbed the Corkscrew Route up Cerro Torre together with Colin Haley while later that year he made the second ascent of Jobo Rinjang in Nepal. His death is yet another difficult blow to American alpinism.