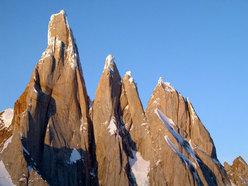 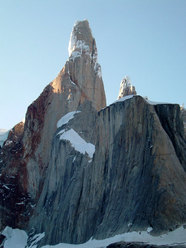 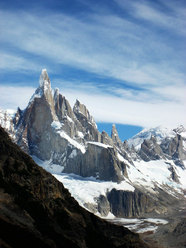 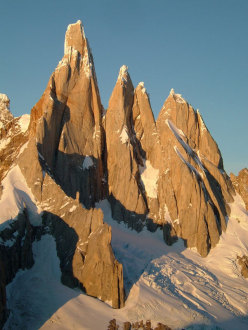 With regards to the bolt chopping on Cerro Torre's Compressor route, we have received and published the views of Stefano Lovison, shared by numerous Italian alpinists.

The views expressed in the article written by Stefano Lovison, which first appeared on http://alpinesketches.wordpress.com and which is published below, have been shared by many Italian alpinists and Mountain Guides and this shows just how much the Compressor route bolt chopping has touched upon the entire mountaineering world, not just the Italian one. We have published the article below out of duty to report and also because we feel it important to consider the current discussion as it unfolds. In the conviction and hope that, by overcoming the present - at times starkly contrastingly positions - the mountaineering world can find a way of uniting and sharing the same passion. Beginning with, above all, that respect for man which should come first and foremost, even before alpinism itself.

We had already stated the following on Alpine Sketches: over there at Cerro Torre, the ethics of mountaineering were transforming into a sort of religion, with their own priests, warriors and, above all, with their own demon: Cesare Maestri, the source of all evil. This has been dramatically confirmed by the recent turn of events. Firstly, the toponym "Col of Conquest" was cancelled from PATAclimb.com, the site managed by Chaltén guru Rolando Garibotti; regardless of what opinions you happen to hold about Maestri, for decades this place name fuelled the dreams of entire generations of mountaineers. A second, far more militant and arrogant action, followed: the destruction of the Compressor Route by Jason Kruk and Hayden Kennedy.
The expansion bolts placed by Cesare Maestri in 1970 no longer exist, what Rolo Garibotti referred to contemptuously as a "Via Ferrata" is no more – as if Maestri’s route on Cerro Torre had rendered the mountain an easy outing for any old Sunday climber.

What would mountaineers like Bill Denz, Paul Pierre Farges, Marco Pedrini or Reinhard Karl have said? What will the likes of Jim Bridwell, Steve Brewer and Dean Potter say, as well as the Italians who carried out the first winter ascent, Rosanna Manfrini, Hans Kammerlander, Robert Jasper, the Anthamattens and hundreds of other good mountaineers? People who fought their way up the bolt ladders for decades, leaving behind wonderful pages in mountaineering literature? Perhaps some initially turned up their noses but, in the end, from all those pages we can clearly see praise and admiration for Maestri.

Is it really possible that all of them failed to understand that that was nothing more than a simple via ferrata, and that no one refused the disgraceful call of Maestri’s "insanity"?

There are only two independent lines up Cerro Torre: the Ragni route along the West Face and the Compressor, up the South-East ridge. All other routes join these, sooner or later. South Face, What's love got to do with it, Infinito Sud, Devil’s directissima, Quinque anni ad paradisum all converge where K&K chopped the bolts. And now?? Will they be left incomplete? And will they remain incomplete as a mark of respect or modesty, just as Toscanini did in 1926 when he interrupted the performance of the Turandot to pay homage to Puccini, who died before completing his opera? Or will they simply remain in their current form, suspended in a void of blind arrogance?

And why destroy only Maestri’s 1970 route and no other line? This begs the question as to why only the Compressor is considered filthy; why not then other routes which have come to symbolise this precarious balance between tradition and innovation, modernity and past experience. One starts to wonder what holds them back from other, just as questionable routes established over a number of different seasons, as if they were building sites, or from those climbs established entirely with the use of fixed ropes. Not to mention aluminium shelters, abandoned like wounds within the folds of Cerro Torre, or simply hurled down the face, left to shatter into a thousand pieces before being swallowed up by the glacier below.

Garibotti adopted the term "by fair means" long ago to refer to the alternative challenge to the Maestri route. Ermanno Salvaterra made an attempt and added 4 bolts; Chris Geisler and Jason Kruk added 1 more: K&K took advantage of these, but with "reasonable use". What is the difference I ask, from an ethical point of view, between using 10 or 100 of them?

Does the fact that they chopped a hundred or so bolts in the name of "fair means" justify those who, better than them, wish to chop their bolts in the future? If so, we may find ourselves back in the Middle Ages once again. "Watch out, you sheer vertical 'water drop' routes in the Dolomites, you Yosemite Big Walls, you Wenden multi-pitches: Hey there, you ladder swinging climbers hanging off the bolts on Tis-sa-ack on Half Dome! The Barbarians are coming to punish the opulence of decadent mountaineering!"

The actions of Canadian Jason Kruk and American Hayden Kennedy are the result of a unilateral decision and of a concept of mountaineering which lacks respect for those of the past. Furthermore, this concept clearly lacks the ability to place past climbs (or attempts) into their proper context, in relation to the prevailing conditions, to the equipment available at the time and to the isolation of those places in the Maestri era. El Chaltèn, which in 2007 expressed itself against chopping the bolts off the Maestri route since as was considered "historical heritage", now quite rightly considers K&K "personas non grata".
By chopping the vast majority of bolts (Kruk and Kennedy arrogated the right to determine a degree of purity) one deliberately wanted to eliminate a part of history, as if Maestri were a detestable and bloodthirsty dictator, and as if his route were a monument to him and not merely the traces of man’s gruelling efforts up a mountain.

This controversy has produced some unpredictable aftereffects and, as always happens with big disputes, even the most radical positions have lost some of their bite and some have even changed dramatically. K&K’s actions have, for instance, provided a different image of Cesare Maestri, making him almost seem like a nice guy (he, who never distinguished himself for his sympathy or popularity…). They have succeeded in drawing out the most human and fragile side of Maestri: no longer the mountaineer who raped Cerro Torre, but the man who, despite his hatred for that peak, lived inside and outside its creases like no other. Not only thanks to his memorable winter feat, for those 54 days of mountaineering – followed by many others the next autumn – with frostbite and the use of a gas-powered compressor which turned out to be, if not completely useless, then certainly a feat in its own right, a bit like Fitzcarraldo. For good or for bad, Cesare Maestri has formed an integral part of Cerro Torre since 1959.

This "little, ignoble story" renders not only the purists - K&K – disagreeable, but also and above all Garibotti, with his inclination to codify everything, to label everything in a world which is chaotic and full of variables. Just as he did when he arbitrarily changed the name of Col of Conquest into the Torre-Egger Col; or as he does when indexing routes which end nowhere, or those climbed without reaching the summit, with or without snow mushroom, and exactly how many metres. Garibotti defines non-summits as those climbs where an alpinist stops just a few centimetres short of the top, and on many occasions he casts doubt on routes and questions the word of other mountaineers.

As previously mentioned, all this has been a crusade and not a fruitful debate: no one was asked to take part and the youngest and most eager, those with the biggest ego (the very same ego which drove Maestri some 40 years ago, it's worth remembering) took the question into their own hands. Had it been carried out by Garibotti himself, then it would have been far more comprehensible, but he didn’t have the courage - not only alpine but also moral - of his own convictions. This is precisely why I reproach Garibotti in much the same manner as K&K.

I now ask the entire mountaineering community how much longer this endless fury continues to make sense? The reprimand given to K&K is in itself not sufficient; on the other hand, I think it is impossible to ask for revenge or to restore the Compressor route to its former state. I do believe however that we can ask for it to at least not be cancelled from the guidebooks and topos. In this sense I ask for the route not be eliminated from our collective memory and that the figure of Cesare Maestri be completely redeemed, both from a human and mountaineering perspective. And that one gleams the ray of sincerity which accompanied all his actions, right from that first, dramatic ascent of Cerro Torre with Toni Egger and Cesarino Fava.

Stefano Lovison
Thanks to Marina Morpurgo.
Translated by Luca Calvi