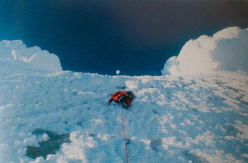 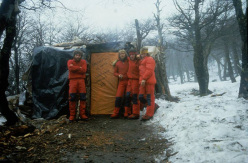 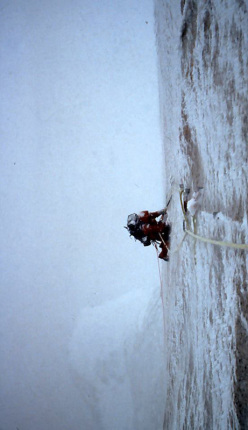 It's currently winter in Patagonia. Exactly 30 years ago, in July 1985, the Italians Paolo Caruso, Maurizio Giarolli, Andrea Sarchi and Ermanno Salvaterra carried out the historic first winter ascent of Cerro Torre via the 'Compressor route' established by Cesare Maestri up the East Ridge. Here is a short film about those days on the mountain that added, like so many others, an important chapter to Patagonia's mountaineering history.

It's currently winter in Patagonia. Exactly 30 years ago, in July 1985, the Italians Paolo Caruso, Maurizio Giarolli, Andrea Sarchi and Ermanno Salvaterra carried out the historic first winter ascent of Cerro Torre via the 'Compressor route' established by Cesare Maestri up the East Ridge. Here is a short film about those days on the mountain that added, like so many others, an important chapter to Patagonia's mountaineering history.

The great condor glides through the winds. Unique, silent, a witness to what happened and what is yet to take place. “Off belay..." followed by a curse, as the haulbag is swallowed by the void and disappears, silently into the dark of night. A switched rope, words misunderstood, confused by the wind: endlessly repeated rope maneuvers, always the same, had turned into a mistake. Better still, a horror for the three climbers on the Exocet route. They’d just lost their food, clothing, sleeping bags, everything. And so the idea of making the traverse was nipped in the bud.

They look at each other, dumbfound, already knowing everything they needed to know: they’d have to retreat, but before doing so they would have o deal with the unknown, with that difficult, cold bivouac. Few words are exchanged, the silence only broken by the wind and ice axes digging into the ice. They move constantly: it’s the only way to warm up. They are demoralized. Nothing to eat, nothing to drink ... and no cigarettes: this is what irritates Ermanno most. Many years have passed, but Icio, Elio and Ermanno still smile about that unsolved riddle of the haulbag that was dropped ... with all cigarettes, damn it!

A stronger gust and the condor glides towards Cerro Torre. As in a flashback, Elio and Ermanno are bivying below the final wall. It’s their first time in Patagonia - the Maestri route had onlybeen repeated once, by Bridwell and Brewer. They don’t have sleeping bags, food, something to drink, but Elio has saved some chocolate: he splits it and shares it with his friend. At the time a storm prevented them from reaching the summit, but Ermanno will forever remember the "warmth" of that little bit of chocolate…

The wings tip imperceptibly and the scene changes once again. A year later, just in time to make out Icio and Ermanno on top of the Torrre. Then, another gust, another fast forward. Icio, Andrea and Paolo consoling Ermanno, desperate after having dropped the crampons. And Icio once again, who shoves the semi frozen hands of his partner into some gloves. A short while later, all four of them are on the summit. It’s the historic first winter ascent of Cerro Torre. Circling slowly we follow their descent, arduous, painful, down to base camp where they have to shovel the snow off their buried tents. The soundtrack is Patagonia, the action dominated by a group.

How often has the howling wind swept away the stars? How many times have the climbers’ doubts reached the condor in flight?

“Let’s go." Outside the storm still rages. But Ermanno insists: someone has to stop this waiting game. It's all been seen and done before. Countless retreats, just like the intuition, rewarded with clear skies or summits reached. And so the useless "I told you so" isn’t uttered, it’s obvious and already heard.

In his continuous flight our silent winged witness has seen hardships, joys, the long waits. After days of sitting out the storms, it’s heard those "Never again!”, thought, said and sometimes screamed into the raging storm. It saw Andrea as he observed, enchanted, the East Face of Cerro Torre and pointed it to others as a dream worth following. It witnessed the efforts and hardships along the glacier. Watched expeditions depart. Those return from the summit, and those descend empty-handed. It saw dashed dreams and lives. Heard the tears. With its eyes it weighed those the huge rucksacks. he say the climbing brothers, Elio and Icio, with crazy loads making their way slowly and inexorably up the glacier and onto the face. He sensed Elio’s gaze, lost in the horizon of his memory as he welcomed his new partners on top of Fitz Roy. And he admired, smiled at Ermanno’s enthusiasm and Andrea’s technique.

Theirs is a style honed by an immense love for climbing, coupled with the extreme ability to resist against everything and everyone. It’s a feeling forged by the howling wind. It’s a Patagonia experienced by many partners. An endless story: always searching for the mystery of Patagonia and its men. For that magic, already experienced, which truly seems really impossible to do without.