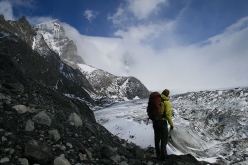 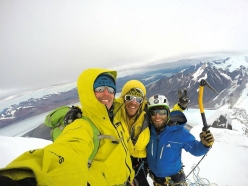 The alpinism and adventure up 'El Valor del Miedo’ (1000m, 90°, M6+, A2), the new mixed route established by the Ragni di Lecco climbers David Bacci, Matteo Bernasconi and Matteo Della Bordella who finally resolved the long-standing problem of the East Face of Cerro Murallon in Patagonia. The first ascent was carried out in a day and a half in pure alpine style on a remote Patagonian mountain that was first ascended in1984 by the Ragni Casimiro Ferrari, Carlo Aldè and Paolo Vitali.

"It was a great adventure. An adventure reminiscent of former times... yes, in some respects we experienced Patagonia as it used to be." These are the words of Italian alpinist David Bacci who recently returned from El Chalten and Patagonia where, from 3 to 4 February 2017, he made the first ascent of the East Face of Cerro Murallón together with Matteo Della Bordella and Matteo Bernasconi. They trio did so in perfect alpine style, without bolts, transporting all their gear on their own, battling their way up and down the new route through the storm. On what is considered to be one of the wildest, most remote mountains in Patagonia. Information initailly was scarse but even with first few details it was clear that they’d pulled off a remarkable ascent. But now, while listening to David, one can easily imagine that there's much more to this ascent than first meets the eye. His story needs no additional questions. It flows, slow, essential and profound, like those ascents, like those adventures, that contain a thousand stories and a thousand emotions. Those climbs you remember hour by hour, minute by minute. Ascents that seem to be marked by a perfect destiny and that are made to be remembered and recounted.

The start, or rather the premise, is like one out of a storybook. All three climbers are members of the Italian Ragni di Lecco group. And Cerro Murallón is an important chapter in the history of this famous mountaineering club. On 14 February 1984 Casimiro Ferrari - one of the most important Patagonian climbers and one of the pillars of the club and Italian mountaineering - made the first ascent of this peak together with two young climbers, Carlo Aldé and Paolo Vitali, two other Lecco "spiders". Casimiro was 44 years old at the time, this was his fourth attempt at Murallón and the ascent up the Central Pillar of the NE Pillar came right at the last minute, when no one believed it was possible any longer. That four-and-a-half day adventure is remembered for the difficulties they encountered, the beauty of the mountain, the tower dedicated to Benvenuto Laritti (another unforgettable and talented Ragni di Lecco climber), that route dedicated to Laritti and Carlo Mauri, and also the descent rendered even more problematic due to the Patagonian storm.

Since that epic first ascent Murallón has lost none of its awesome reputation as being a difficult and distant mountain. Only a few, among the best in the world, managed to reach its summit in the ensuing 33 years. And the mountain’s East Face was still there, virgin. It had attempted in 1999 Frenchmen Laurence Monnoyeur and Bruno Sourzac, but the two were forced to retreat from 2/3 height due to a violent storm. And before them, in 1964, it had been attempted by the Argentines Jose Luis Fonrouge and Rafael Juarez, two founders of Patagonian mountaineering. In short, there were all the right ingredients for a major project. A project that could not go unnoticed, especially in Lecco, in particular by the city's young Spiders.

Last year David Bacci and Matteo Della Bordella made a recce trip to explore the East Face of Murallón. A trip but also a "glance" that would prove invaluable. That season the duo succeeded in making an outstanding ascent nearby, namely the first repeat of the Ragni route up Fitz Roy (another Casimiro Ferrari and Vittorio Meles masterpiece). Furthermore, Bacci also ticked the West Face of Cerro Torre, i.e. the legendary Via dei Ragni established in 1974 by Casimiro Ferrari (once again), Daniele Chiappa, Mario Conti and Pino Negri. This repeat marked the apex of Bacci’s two and a half month Patagonian expedition that, in some ways, inspired his next journey: the one that aimed for, that dreamt about, the unclimbed East of Murallón. A dream he shared with two strong climbing partners: Matteo Della Bordella, an undisputed alpinist and reference point, and Matteo Bernasconi, a mountain guide with a first-rate curriculum of climbs, not only in Patagonia.

"I set off before them, on 18 December, with Caterina (Tixi ed) my girlfriend" David Bacci told planetmountain.com "after those two and a half months of climbing in Patagonia in 2016 I wanted and needed to start the adventure exploring the Patagonia’s horizontal sphere." This, translated, means that he and Caterina started at Ushuaia, the capital of Tierra del Fuego, and travelled all the way to El Calafate at Lake Argentino. A 1000+ km journey the two completed on their bikes. "It was tiring because we had to fight against the wind, cycling up to 100 km per day. 18 beautiful days, an adventure within the adventure." The other adventure he refers to is of course the ascent of Murallón, that began on 10 January when he was joined by the two Matteo, Della Bordella and Bernasconi.

The start was... bureaucratic. They needed to get permission for the ​​Los Glaciares National Park, within which Cerro Murallón rises to the west of the Upsala Glacier. Then, after sailing up Lake Argentino for 3 hours, they reached Estancia Cristina. From here they began the tedious march back and forth (3.5 hours each way) transporting all their gear to Rifugio Pascale that acts as the base for the Upsala glacier, before heading on towards Cerro Murallón. The gear had to be transported first to the glacier lip and then, weather conditions permitting, to below the face. Yes, because the weather was truly Patagonian, like it hadn’t been for years. I.e. it "stormed" for 20 days. Until 1 February, when the trio finally moved below the East Face to make the most of the good weather window, on the basis of a 4-day forecast, subsequently reduced to 2. Until that point, they had never even caught a glimpse of the face…

On 3 February the clouds finally lifted and Murallón appeared in all its glory. The East Face lay there, immense, most of its 1000 vertical meters plastered in ice. Without a moment's hesitation the three headed straight to the line they’d identified the year before. This starts up a gully of ice, up to 90°, and continues relentlessly past a central section of M5/M6 mixed terrain before leading to the final 300m. Here they bivvied on a small ledge they carved out of the ice. They recommmenced climbing early the next day, 4 February. The face proved challenging but the team worked well together, close knit and faultless. David Bacci is an ice climbing specialist. Matteo Della Bordella, despite not being a mixed climbing regular, accepted the commitment "he was great, absolutely tireless." Matteo Bernasconi, a true mountain guide, was "a safe bet, a force of nature on the ice." The trio reached the last 30 meters "the last pitch, the hardest of all." And, at that point, they became engulfed in a storm. So they summited in the best of Patagonian traditions: it felt like the world had come to an end. As it happens, the weather was reminiscent of that encountered by Casimiro Ferrari, Aldé and Vitali back in 1984. 33 years have passed since then but the storms have remained the same and the climbers were confronted with the very same problem as their predecessors: they had to decide how to descend.

David and the two Matteo headed towards the Italia plateau and descended, more or less blindly, towards the south. On the upper glacier they sunk hip-deep into the snow. Five hours were needed to reach the glacier. They abseiled without seeing the giant serac that loomed ominously above them. They were soaked to the bones and utterly exhausted. And they happened to be on the wrong glacier: they had descend onto the opposite side from their tent and starting point. It was late in the evening and, not knowing where to bivy, they continued through the crevasse-strewn landscape. And they walked towards "salvation": two granite boulders jutted out of the icefield, like safe havens, offering the shelter they so badly needed. The night passed by slowly, marked by an intense cold they’ll find hard to forget.

On 5 February the bad weather continued, as did the hardship. The three had to return to their tent at the base of the East Face. They finally reached it after 14 long hours spent negotiating the glacier and moraine … at this point they were beyond exhaustion, but safe at last. They spent that night in the tent and the next morning, packed like mules, they returned to Rifugio Pascale. The toils had come to an end, as had the great adventure. The time had come for the partnership (a great partnership) to split up. Matteo della Bordella remained in Patagonia to work on a film project. While Matteo Bernasconi relaxed by trekking around Patagonia with his girlfriend…

At this point David’s story dissolves with a finale of emotions that almost blend into space and time: "We were tired and at the same time extremely happy. It was a true adventure. We felt really isolated and distant from everyone and everything. From over there you can see Cerro Torre and Fitz Roy, tiny and remote on the horizon. It was great, even hauling all the gear ourselves. And the climb, carried out in alpine style. Followed by that descent. All that mixed climbing, difficult, in such a remote place… The long wait finally paid off. The storm. The face that we never managed to see beforehand. A day and a half of perfect climbing... And then the Ragni di Lecco, Casimiro, all that history, Carlo Aldé who phoned to congratulate us. And the feeling of having got a taste of what Patagonia used to be... ". Yes, this really is a great story, almost reminiscent of former times. By the way, the route has been called El valor del miedo, ie The value of fear. This, too, speaks volumes about their adventure.