Carletto Alverà 'Lete' during the making of the film Rosso 70
Photo by arch. Rosso 70 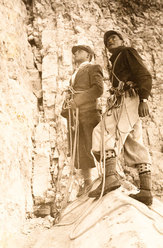 Carletto Alverà and Ettore Costantini at the base of the Dimai - Comici on the North Face of Cima Grande di Lavaredo in 1941.
Photo by arch. fam. Carletto Alverà

Carletto Alverà, good bye to another flag bearer of the Scoiattoli di Cortina

Yesterday morning Carletto Alverà Lete passed away at the age of 92. The Italian was the flag bearer of the Gruppo Scoiattoli di Cortina, a mountain guide and ski instructor. He takes with him another piece of the history of alpinism in Cortina and the Valle d'Ampezzo, Dolomites.

He didn't go by unnoticed, Carletto Alverà. Not because he put himself in the limelight. And certainly not because he was a man of many words. Quite the contrary. You noticed him immediately because he seemed to have something special. Perhaps it was his posture. Perhaps it was his upright physique, like that of an athlete, which distinguished him even at 90 years of age. Because Carletto was the child of another era, of other mountains. He had this within his gaze, deep within his eyes, that ancient and sincere nobility. At least this is what seemed to me from the very first time I met him. The occasion arose with Rosso 70, the film which retraces the 70 year history of the Scoiattoli di Cortina, and in which Carletto Alverà "Lete" is one of the protagonists.

The recollection of that meeting is still very much alive. Carletto, born in 1918, was one of the flag bearers of the Gruppo degli Scoiattoli, the Cortina mountaineering club. He joined the group in 1941, was president for 17 years (from 1957 to 1974) and he wasn't one of the 10 young founder members simply because in 1939 he was serving the military at the Alpine School in Aosta. In 1942 he became a ski instructor and mountain guide and it is worth mentioning - and this is by no means a minor detail - that for many years he was also the Cortina barber. In short, everyone knew Carletto, since always.

Of his numerous climbs one cannot forget one of the first repeats of the Dimai - Comici up the North Face of Cima Grande di Lavaredo, in 1941. On that occasion his partner was "Vecio", alias Ettore Costantini, a pillar amongst the Club's founder members and an alpinist who, along with Claudio Apollonio, left his name forever on that splendid route up the Tofana di Rozes pillar.

Those who know their mountaineering know that climbing the Dimai - Comici up the North Face of Cima Grande at the time was a real undertaking. Even more so since Carletto, as he himself recounted, "made a mistake" and climbed off-route and inadvertently established a new and extremely difficult variant. Few know about this. Just as few know that Alverà was a true skiing ace. He excelled in ski jumping, in cross country and downhill, so much so that he often a member of the Italian skiing team. And in 1943 he won the Cortina combined event. Yes, Carletto was an athlete and man from a different era. A true champion.

While talking about himself for the film, we realised that he omitted numerous details. His victories and medals, for example - these are things we found out from the other Scoiattoli. Instead, slowly but surely and with a simplicity and normality which today cannot but amaze, from his words emerged the essence of life itself. "Beautiful things" he told us "are beautiful even when they come to an end." I'll never forget this sentence. Thank you Carletto.