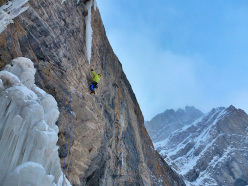 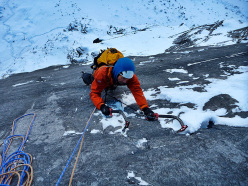 Bullock and Boswell climb hard ice and mixed in Canada

British alpinists Nick Bullock and Greg Boswell are currently in the Canadian Rockies where they have repeated a series of hard, rarely repeated ice and mixed climbs in fine style.

Nick Bullock and Greg Boswell have got their winter climbing season off to a great start with a repeat of the strikingly obvious The Maul (M7) on Wedge Peak, followed immediately by Man Yoga on the Stanley Headwall. First climbed free in 2011 by Jonny Simms and Jon Walsh, the Brits encountered thin ice due to early season conditions. Bullock subsequently described this 250m M8 as "a truly great and memorable route".

The two then travelled down the Icefields Parkway to Mount Patterson where after another early start they repeated the spectacular Rocket Man. Established in 1999 by Dave Thomson, Kefira Allen, Eric Dumerac and Raphael Slawinski and graded VI M7+ WI5+, this committing 350m line climbs a series of stunning daggers past poor rock. Understandably the route is rarely repeated and the repeat did not go unnoticed, especially in Canada.

The latest ascent making headline news is the third and fourth repeat of Victoria’s Secret Deviation, put up once again by indefatigable Slawinski on the Stanley Headwall. It was this 50m outing which follows a thin 50m trad-protected crack that was one of the main reasons Boswell had travelled to Canada in the first place, and he succeeded in repeating this M7+ onsight. Boswell then stripped the gear and Bullock flashed the route.

The two will remain in Canada for another week and their progress can be followed on nickbullock-climber.co.uk and gregboswell.co.uk