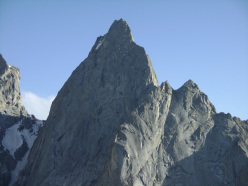 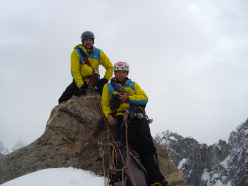 In August 2012 a Bulgarian expedition comprised of Doychin Boyanov, Tervel Kerelov, Michail Michailov and Nikolay Petkov made the first ascents of Levski Peak (5733m) and Grey Tower (5435m) in the Khane Valley, Pakistan.

This August we succeeded in climbing two new routes on two of virgin peaks: Levski Peak and Grey Tower. We placed our base camp at the so-called Boulder Base Camp, at 4050m in the middle of First Terrace grassy plain. It is a beautiful, green and flowery spot, near the Khane river and some large boulders. This was our second expedition to Khane valley, after an exploratory expedition in 2011.

Grey Tower, 5435m
East Ridge, 600 m, AI3 (to the col), 6b, mainly 5c
We placed a tent on the col between Meligo Peak and Grey Tower. Reaching this col from Khane valley is difficult and dangerous because of last 300m (ice, snow and exposed to rock fall, negotiate this early in the morning). 13 pitches lead from here to the summit, mainly easy and moderate climbing, with a couple of 6a+/6b sections. The summit is an ideal rock needle with a 2x3m flat platform on the top with fantastic views in all directions. 11 rappels led to the col, plus 80m down climbing.