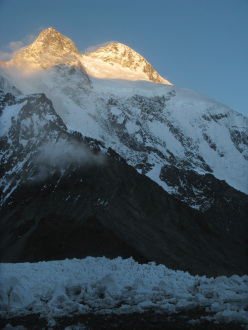 Krzysztof Wielicki has called off the Polish winter expedition to Broad Peak. The bodies of Maciej Berbeka and Tomasz Kowalski will remain up on the mountain.

"Considering all the circumstances, conditions, my experience, history of Himalayan mountaineering, knowledge regarding physiology and high-altitude medicine as well as consultations with doctors and co-organizers of the expedition in Poland, I have to declare Maciej Berbeka and Tomasz Kowalski dead.

Taking into account the time that has passed since the last contact, altitude where it took place, their condition, current weather conditions and all other factors, I have to claim openly that both climbers are dead.

The expedition has come to an end. We are packing the base camp and start to descend. March via the Baltoro Glacier will take approximately 5 days. We will come back to Poland on approximately 20th March. Due to lack of electricity, we will not have any possibilities to maintain contact via telephones or e-mails and thus, the will not be any information about us till approximately 15th March."