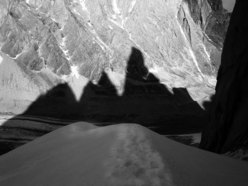 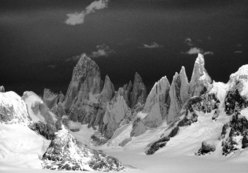 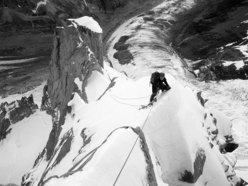 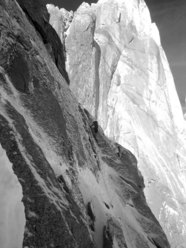 Boom of ascents on the West Face of Cerro Torre, Ermanno Salvaterra's point of view

Ermanno Salvaterra discusses the state of Patagonian mountaineering, starting with the large number of ascents on the West Face of Cerro Torre to talk about other class routes on the Torre and her sisters.

It was to be expected: after what recently happened on Cerro Torre's West Face Ragni route, many have now begun to think about the reasons. The question is simple: since 1974, i.e. 34 years since Daniele Chiappa, Mario Conti, Casimiro Ferrari and Pino Negri reached the summit, the historic Via dei Ragni had received only 5 integral ascents - 6 if you count last years ascent of Kelly Cordes and Colin Haley who reached the Col of Hope from the South Face.

During the first half of December things "exploded" with 21 mountaineers reaching the summit in a mere 9 days. These included: the first female ascent of the route and the 5th overall of Cerro Torre at the hands of Dörte Pietron from Germany (teamed with the Argentines Jorge Ackermann, Tomás Aguilo, Charly Cabezas, Rolando Garibotti and Matías Villavicencio), the first solo ascent of the route (and 5th overall of the Torre) by Walter Hungerbühler from Switzerland and the first Italian repeat by Matteo Bernasconi and Fabio Salini. So the question arises: has something changed and, if so, what?

As reported on climbing.com, one of the foremost Patagonian mountaineers Rolando Garibotti commented: "It appears that the climbing community has finally come to understand that an ascent of the Compressor Route is not really an ascent of Cerro Torre. It is as if overnight everyone stopped climbing Everest with oxygen, fixed rope, and Sherpa support."

Add to this the fact that many say that the weather in Patagonia is no longer as terrible as it once was. We asked one of Italy's leading Patagonian lights, Ermanno Salvaterra, for his impressions.

The West Face of Torre and Patagonian mountaineering
by Ermanno Salvaterra

What can I say about the latest ascents on the West Face of Cerro Torre? I'm very happy to hear what's been going on in such a short space of time on the most beautiful mountain in the world. I knew that Salini and Bernasconi would succeed. Manuel Panizza should have been there with them. He was the one who initially asked me for information about the route. Then he had some problems and couldn't go. I had also spoken to Salini. I told him if you're convinced you can do it, and luck with the weather isn't the only factor. We've seen this in the past. I can't say anything about the weather. Certainly if we listen to what the climbers said many years ago then something seems to have changed. And they weren't climbers who stayed there for just twenty days. We're talking about the likes of Buscaini and Metzeltin, Reinhard Karl, Boysen, Crew, Haston, Fonrouge, Martini and many others.

What happened in less than 10 days is certainly something beautiful. Above all because in that period just one team climbed the Compressor Route. I agree with what Rolo Garibotti said about the Torre and the Himalaya. If we're forced to set some fixed ropes in the Himalaya then so be it, let us transport them, fix them and then remove them. Then let's see if we continue down this road. Let's see if also Italian mountaineers, and we've got plenty of strong ones, open their eyes. If they begin to look at the Torre and her sisters with a different mentality and not only attempt to reach the summit as quickly as possible. I've already said this in the past, others have already expressed these thoughts in writing. I'd be really pleased if it were the Italians who put us back onto the right track. Do we ever stop to think about what mountaineers were up to 30-40 years ago? We've got to read the history of these mountains extremely carefully. And we've also got plenty to learn from the history of the 8000m peaks.

An interesting ascent is the climb to the West Face after having climbed the first part of the Maestri route (by the Norwegians Ole Lied and Trym Atle Sæland, editor's note). Hadn't they been stopped by the mushroom, then their ascent would have been very important. This is what the English, and Fonrouge in 1968, wanted to do. What Maestri had wanted to do in 1958. In his book "Climbing is my job" Maestri wrote: "Cerro Torre is circa 1300m high. The central section presents difficulties such that it cannot be taken into consideration. There are two weak points. The East Ridge with descends towards Fitz Roy and finished by forming the large summit called "El Mocho", and a big corner on the right-hand side of this formidable wall. The ridge has difficult sections at the base of the great towers, circa 400 -500m from the summit. After reconnaissance from the air during our first expedition we intended to climb the entire ridge to the base of the towers and then traverse onto the south face to a large ice overhang on the edge of the SW ridge, and then climb the West Face from here." How often had people spoken about this line? I remember that Marino Stenico had spoken to me about this route. In 1958 he had wanted to climb it.

Was it last year that two Americans wanted to remove the compression bolts from the Maestri route? If this were to be done then the Torre would certainly become "il Torre" once again. But I don't feel up to doing something like this. I'd first like to ask Maestri and I think he would say yes. At the end of the day this is what was going on in the 1970's. Had the weather not been bad and had he been helped by his companions, then the Torre would have been "clean" at that time already.

No one talks about other routes. Some say one needs to bear in mind that it was a different era. Yes! Everyone has the right to do want they want, but we cannot then claim that our ascents be defined as alpine. I'm not a believer but I believe in alpinsim. I don't deny to have committed perhaps some venial sin. Three years have passed since we climbed the polemic route. Many have talked about it. But apart from the Austrians Ponholzer & Co., no one has attempted it since. Toni Ponholzer had tried it for at least 20 years. Ah, people say, but there there's no 8a climbing... To which I respond, no, there's alpinism.

Let's take the Slovenian route on the South Face as an example. Perhaps climbed free this doesn't become 8a. It offers, put simply, "only" very alpine climbing. The Inferno route? Same thing. The British route? No, too old, people say. It's more than 30 year old. Who was he anyway? They called him "Hydraulic man". His partners Campbell, Kelly and Wyvill had been on the wall for 28 days in 1978. Was it perhaps too simple? And there's a route to be finished, seeing that Proctor and Burke arrived perhaps a pitch from the mushroom from the north. And there's much still to be said about other routes and more still. But perhaps in this day and age it's not trendy to talk about alpinism with a capital A... I'm old now, but if I still manage to do something then I'd prefer to do so following the teachings of master "Hydraulic man". And when I return home, even if I haven't reached the summit, I'll be satisfied and I'll have a project for next year.