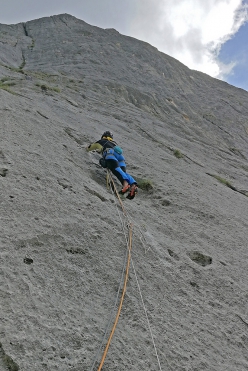 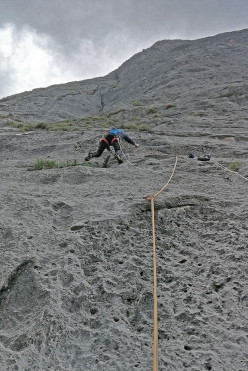 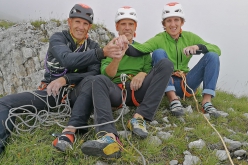 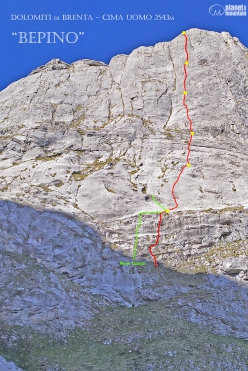 Bepino on Cima Uomo in the Brenta Dolomites by Michele Cagol, Rolando Larcher

Rolando Larcher and Michele Cagol have made the first ascent of Bepino, a new multi-pitch rock climb on the west face of Cima Uomo (2543m) in the Brenta Dolomites to remember their father-in-law Giuseppe Deavi. The route was subsequently freed by Bepino's nephew and Rolando's son, Alessandro Larcher. The three climbers share their thoughts.

Bepino is a new route I established with Michele Cagol, to remember a person we loved dearly: Giuseppe Deavi. For us Giuseppe, or Bepino as we affectionately called him, was a father-in-law, a friend, a trusted advisor; enthusiastic about life in general and always there in the moment of need. Unfortunately at the end of 2019 he passed away, discretely, true to his way of being.

It is customary for us climbers to remember those we love with new routes and this got me thinking about how this route came into being. It was in many respects the closure of one of the many circles that life opens.

This journey started when we first met Michele at the historic crag La Vela, before our beards grew and when we were still without a driving license. We met two sisters who became our life partners. What followed were many years of shared family lives, of climbing, adventures and some expeditions. Children, work, worries, but climbing was our constant, a magical escape valve. And then we joined forces once again: enthusiastic and motivated, to create something beautiful, to remember a truly beautiful person. Two days we spent establishing the line on a peak we know well, up rock which seemed fitting for the purpose.

And then, we had the privilege and good fortune of being accompanied by my son (and Michele’s nephew) Alessandro, who followed in our footsteps and, in order to honour his grandfather, joined us team for the free ascent.

A final act to this story, an unprecedented, pleasant team of three. When we reached the top, we were all overcome by beautiful, genuine emotions as were we conscious of the fact that this circle, opened so many years ago, had finally been closed.

All this helps me comprehend even more fully that climbing is not just a sport, an outdoor activity, a great love, but the combination of all these elements. A random mix called life.

I really wanted to establish and dedicate this route to Bepino, because he was one of the most important people in my life. Yes, my father-in-law, but also a second father figure (unfortunately I lost mine far too early), a friend, a wise giver of advice, a helping hand, a companion for many happy hours. Everything that I experienced with him continues to flourish within me. The fact that I established this route with both Rolando and Alessandro makes it extra special, because the memory of Bepino united, and moved, us even more.

BEPINO MY GRANDFATHER by Alessandro Larcher

Bepino was my grandfather, a darn good grandfather, composed and youthful. We were very close, he has always there for me when I needed him and he was always keen and happy to help out. I learned a lot from him and although he’s no longer with us, I’ll still learn a lot from him; he’ s alive in all those who loved him. While climbing this route we felt his presence deep within us, with his mild manner and wise words of support. Once I reached the top with my father and my uncle, we hugged each other, and thanked him for having been there with us.