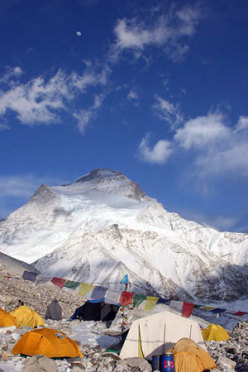 Cho Oyu from Base Camp
Photo by arch. S. Mondinelli

As of 19/08 the German alpinists Benedikt Bohm and Sebastian Haag and Greg Hill from America will be beneath Cho Oyu (8201m, Himalaya, Nepal-Tibet) to attempt a speed climb and descend the sixth highest mountain in the world in less than 24 hours.

"Speed ​​Mountaneering" is the modern interpretation of fast and light mountaineering and the two Dynafit ambassadors Benedikt Bohm and Sebastian Haag know a thing or two about this discipline. Since 2005 the duo have been on expeditions together gaining experience on Gasherbrum II (8035m), Mustagh Ata (7546m), Manaslu (8136 m) and Broad Peak (8051m).

The two have prepared intensely for this new challenge which starts from Base Camp at 5800m, reaches the summit of Cho Oyu (8201m) and then descends back down to base camp on skis, all in less than 24 hours. Thanks to modern technology this ambitious goal will be followed step by step as it unfolds.

Period: from 19 August to 2 Ocotber 2012
Program: Travel to Kathmandu/ Nepal. Acclimatisation ascent of Mera Peak (6461) in Nepal. Travel to Tibet via Nyalam. Ascent to Base Camp Cho Oyu (Tibet) located at 5800m.
The summit push is expected towards the end of September.